Proton May Not Be All That Strange 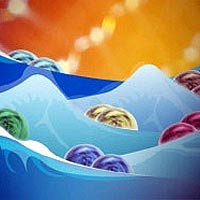 Quarks in the sea: Any of the six quarks (up, down, strange, charm, top and bottom) may appear in the sea as pairs of quarks and anti-quarks. The lightest quarks are most likely, while heavier quarks show up less often. So, you're more likely to find up, down and strange quarks. The experimenters measured strange quarks, because they aren't full-time residents of the proton. This makes it easier to separate their contributions.

It can seem a little overwhelming at times. The deeper we peek into the nucleus of the atom and its constituents, the more detailed our picture of this cornerstone of all matter becomes. But it seems that the HAPPEx experiment, rather than adding to the complexity, is actually simplifying our view of the nucleus's constituents.

The simple picture of the proton, for instance, is that it's made up of three quarks. These three quarks come in two different flavors: up and down. The three quarks are forever married by gluons, so named because they carry the strong force energy that 'glues' quarks together. This view of the proton originated in the 1960s. Many thought that the proton's building blocks, its quarks and affiliated gluons, would give rise to the proton's properties, such as mass, size, and so forth. Then a problem arose: in the 1980s, physicists found this wasn't always the case. For instance, protons have an intrinsic spin. But if you add up the spin from each of the three quarks in the proton, the number you get is small when compared to the amount of spin a proton exhibits. This mismatch was referred to as the 'spin crisis.' There had to be something else inside the proton giving rise to the rest of the spin.

Physicists began weighing the possibilities, and a new idea was conceived. Quantum Chromodynamics, or QCD, is the theory that describes the strong force, which dictates how quarks and gluons interact. It predicts that extra quarks may appear inside the proton as part of the 'quark-gluon sea' – a seething mass of particles that constantly blink into and out of existence inside the proton. Quarks that appear in the sea are allowed to bubble up out of pure strong force energy, as long as they don't exist for very long. These quarks appear in the proton as quark/anti-quark pairs. For instance, a charm quark may appear with its opposite, a charm anti-quark, in tow.

“And so, it's been an open question over the last 20 years how much these sea quarks actually affect many of the nucleon's properties, such as the mass, the spin and the charge and magnetic moment distribution,” says Krishna Kumar, a co-spokesperson for the experiment from the University of Massachusetts, Amherst. Any of the six flavors of quarks can appear in the sea. The lightest of the quarks, however, are the most likely to do so. Up and down quarks are thought to be common, as are a third flavor of quark: the strange quark. Since these strange quarks appear in the sea, it was supposed that they perhaps contribute to the proton's properties. But just how much do strange quarks contribute?

HAPPEx II took data in 2004 and 2005. The experimenters sent a beam of electrons into a 20 centimeter-long cryogenic aluminum target vessel containing either hydrogen (a single proton in the nucleus) or helium-4 (the nucleus contains two protons and two neutrons) in Hall A. The electron beam was polarized, meaning that most of the electrons were spinning in the same direction.

Because the electrons were polarized, the team was able to separate out the strange quark contributions by measuring how the electrons collided with the nuclei with a technique called parity-violating elastic scattering. Rather than hit a nucleus directly, an electron spits out a mediator particle that thwacks the nucleus. If the electron emits a photon, it is interacting with the nucleus via the electromagnetic force. This is usually what happens.

However, once every few million times or so an electron meets a nucleus, it will emit a particle called the Z boson instead. When that happens, the electron is interacting with the nucleus via the weak force (experts call it the neutral weak force, specifically).

The electromagnetic force is mirror-symmetric (the electrons' spin will not affect the number of electrons scattered), while the weak force is not (electrons polarized one way will interact differently than electrons spinning oppositely). Therefore, the researchers were able to separate the contributions from each of these forces to the measurement by alternating the electron beam's polarization (spin) throughout the experiment and measuring the fractional difference in the number of scattered electrons due to the beam's changing polarization. Disentangling the information from the two different forces allowed the experimenters to go one step further and separate the contributions of the up and down quarks from that of the strange quarks in the proton's quark-gluon sea. “This technique is potentially one of the cleanest ways to extract a property purely of the sea quarks,' Kumar says.

According to Souder, the result is in line with previous research of the strange quark's influence on the structure of the proton. “We put stringent limits on the fact that the contribution of the sea quarks is small to the magnetic moment of the proton,” Souder explains.

The HAPPEx II result is consistent with several recent experiments, including the G-Zero experiment at Jefferson Lab, the SAMPLE experiment at MIT-Bates, and the A4 experiment at the Mainz Laboratory in Germany.