Researchers Use Bacteria To Reduce Uranium 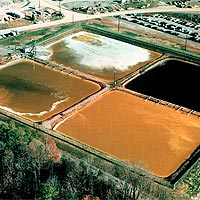 While the Cold War ended decades ago, its legacy will live for centuries in toxic waste. In remote corners of the country from Tennessee to the Pacific Northwest, dozens of federal laboratories struggle to clean up contaminants left from 50 years of weapons programs. New results show a promising technique for cleaning up uranium from some of the most severely contaminated areas by harnessing the powers of microbes already in the soil.

'Toxic uranium is often found in groundwater at places where uranium was either mined or enriched to make weapons,' said Craig Criddle, a professor of civil and environmental engineering at Stanford. 'This uranium-contaminated water can migrate into surface waters, where it becomes a threat to organisms and water supplies. Excavation of contaminated soil or pumping and treating the water are prohibitively expensive and lead to additional disposal issues. An alternative is to stimulate naturally occurring subsurface microorganisms that can convert the dissolved uranium into a solid form that is not susceptible to transport by water.'

For the past six years, a research team at Stanford headed by Criddle has worked with a research team at the Oak Ridge National Laboratory (ORNL) in Tennessee headed by Phil Jardine, a soil chemist and distinguished research staff scientist there, to develop a possible solution to the problem. The group's strategy took groundwater that originally contained more than 1,000 times the drinking-water regulatory limit for uranium and brought concentrations down to the limit. The technique and its early results are described in a pair of papers to appear June 15 in the journal Environmental Science and Technology, a publication of the American Chemical Society. The papers were published online on May 13.

Funding for the $4.6 million, six-year project was provided by the U.S. Department of Energy (DOE). The DOE Environmental Remediation Sciences Program (ERSP) supports basic research on bioremediation—the use of living organisms to clean up toxic waste—and aims to devise a safe, cost-effective solution to the problem of uranium contamination. It also oversees the Stanford-ORNL project and other field research projects at Oak Ridge and other locations. Until the early 1980s, the Oak Ridge laboratory enriched uranium for use in bombs. Wastewater was dumped in four unlined settling pits. When production ceased, lab officials drained the ponds, filled them with dirt and paved a parking lot the size of four football fields to cover the site.

That site is now home to an ERSP Field Research Center—the first DOE field test site for development of the science and technology needed to understand and predict long-term impacts of contamination and to mitigate those effects at 120 sites in 36 U.S. states and territories. The quantities are enormous: more than 475 billion gallons of contaminated groundwater; 75 million cubic meters of contaminated sediments; and 3 million cubic meters of leaking buried waste. The overarching DOE cleanup program has a budget of $220 billion and a timeline of more than 70 years to develop and implement solutions. This is the largest remediation effort of its type, and possibly the largest environmental cleanup ever attempted, Criddle said.

Among the most common contaminants at DOE sites are radioactive metals. These have spread over areas miles wide, making it impractical to store the dirt in closed containers or build barriers to separate the groundwater from drinking water. Uranium sticks to soil, making it impossible to remove efficiently by pumping contaminated groundwater to the surface and treating it there (where its removal creates another disposal problem). But uranium also doesn't stick well enough to soil—over time, it dissolves into the water and can be transported in the groundwater to surface waters, where it is a threat to wildlife and water supplies. In humans, uranium causes kidney damage and cancer.

The extreme conditions at the field site called for a wide range of skills that could only be supplied by a large and diverse team. Members of the Stanford group are Criddle and Professors Peter Kitanidis and Scott Fendorf; senior research engineer Wei-Min Wu; consulting Professor Olaf Cirpka; postdoctoral researcher Jian Luo; administrative associate Julie Stevens; and doctoral students Mike Fienen, Margy Gentile, Matt Ginder-Vogel and Jennifer Nyman. Their partners at ORNL include Jardine and about one dozen other researchers and staff. The Stanford-ORNL team also worked with the consulting firm RETEC to design and construct the field system.

An important initial decision was where to work. The Stanford-ORNL team chose to set up camp less than 20 feet from the edge of the parking lot. They targeted groundwater 45 feet down because field measurements indicated that this water carried high levels of uranium from the ponds. But the uranium was not the only thing present in the water. They also discovered a witches' brew of contaminants—the acidic mixture that was leftover from disposal of sulfuric, nitric and hydrochloric acids; toxic heavy metals; and solvents. Dealing with this mixture presented formidable technical challenges for the team but also was an opportunity to develop a strategy that could cut off contamination of the groundwater at its source.

The Stanford-ORNL team members developed a staged approach and employed an unusual amount of engineering to ensure process control, Criddle said. First, they prepared a region of the subsurface for microbial activity. This was accomplished by drilling wells and establishing a recirculation loop: Groundwater containing contaminants that would interfere with the uranium conversion was sucked to the surface, treated to remove those substances, then reinjected. The pH of the recirculating water was then increased from 3.6, roughly the acidity of vinegar, to 6, a level conducive to microbial growth.

After adjusting pH, the researchers provided weekly additions of ethanol to the recirculating water for more than a year. The ethanol stimulated growth of subterranean microbial populations that converted the uranium into an immobile form. After treatment, high levels of uranium remained on the soil, but the groundwater contained almost no uranium. Analysis of the soil-bound uranium confirmed that it was largely converted into the immobile form.

Bioremediation was used in the 1980s to clean up toxic organics, mainly spills of fuels and solvents. Bacteria basically ate the fuels—chomping down long-chain hydrocarbons—or they 'breathed' the solvents and created nontoxic forms.

'Microorganisms also 'breathe' metals like uranium, converting it into a form that is immobile because it does not appreciably dissolve in water,' said Nyman, a doctoral student whose laboratory studies helped to guide operations in the field. After microbes convert the uranium, it's 'just sitting there, like a rock,' Criddle said. 'In future studies, we hope to see how stable we can make that 'rock.' Ideally, it will remain in that form for thousands of years.'