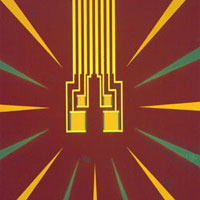 Sensors that detect and count single photons, the smallest quantities of light, with 88 percent efficiency have been demonstrated by physicists at the National Institute of Standard and Technology (NIST). This record efficiency is an important step toward making reliable single photon detectors for use in practical quantum cryptography systems, the most secure method known for ensuring the privacy of a communications channel.

Described in the June issue of Physical Review A, Rapid Communications,* the NIST detectors are composed of a small square of tungsten film, 25 by 25 micrometers and 20 nanometers thick, chilled to about 110 milliKelvin, the transition temperature between normal conductivity and superconductivity. When a fiber-optic line delivers a photon to the tungsten film, the temperature rises and results in an increase in electrical resistance. The change in temperature is proportional to the photon energy, allowing the sensor to determine the number of photons in a pulse of monochromatic light.

This type of detector typically has limited efficiency because some photons are reflected from the front surface and others are transmitted all the way through the tungsten. NIST scientists more than quadrupled the detection efficiency over the past two years by depositing the tungsten over a metallic mirror and topping it with an anti-reflective coating, to enable absorption of more light in the tungsten layer.

The NIST sensors operate at the wavelength of near-infrared light used for fiber-optic communications and produce negligible false (or dark) counts. Simulations indicate it should be possible to increase the efficiency well above 99 percent at any wavelength in the ultraviolet to near-infrared frequency range, by building an optical structure with more layers and finer control over layer thickness, according to the paper.

Quantum communications and cryptography systems use the quantum properties of photons to represent 1s and 0s. The NIST sensors could be used as receivers for quantum communications systems, calibration tools for single photon sources, and evaluation tools for testing system security. They also could be used to study the performance of ultralow light optical systems and to test the principles of quantum physics. The work is supported by the Director of Central Intelligence postdoctoral program and the Advanced Research and Development Activity.