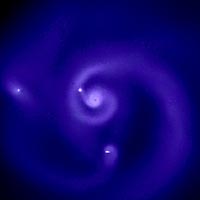 Visualizations of brown dwarf simulations completed by Sijing Shen for her Master's Thesis (May 2006) under the supervision of James Wadsley.

Astronomers have discovered that the large disks of gas and dust around young stars will fragment if two young stars pass close to each other and form smaller brown dwarfs stars with disks of their own. The news was announced this week at the Canadian Astronomical Society in Calgary, Alta, by James Wadsley, assistant professor of Physics & Astronomy at McMaster University, and his student Sijing Shen.

'This is an exciting discovery because it may be the dominant way brown dwarfs are made,' says Wadsley. 'The challenge to theorists was to explain not only the origin of brown dwarfs but also the details telescopes are seeing: brown dwarfs with disks and the systems of many dwarfs orbiting a single regular star. We've done that.'

Brown dwarf stars are as common in number as large stars but are no more than 8 percent of the mass of the Sun. Their low mass prevents nuclear fusion in their core so they don't shine like regular stars. Regular stars form from cold dense cores in giant molecular gas clouds. The natural mass of a core is expected to be large, closer to that of a regular star than a brown dwarf so something extra was required to understand the origin of brown dwarfs.

Using SHARCNET (Shared Hierarchical Academic Research Computing Network) parallel computing facilities at McMaster, Shen and Wadsley simulated several encounters between young stars with disks at unprecedented resolution, seeing gas pile-ups, drawn-out tidal arms and huge masses of gas driven closer to the stars. Amid this chaos several small objects were seen to form, from Jupiter-sized objects up to brown dwarfs. Reports from lower resolution simulations by other groups had shown no indication of disks. However, in every case, the new objects had disks with sizes ranging up to 18 astronomical units (the size of Saturn's orbit). As these rapidly spinning disks evolve they should produce jets of gas and even result in the formation of planets orbiting the brown dwarfs. Both these things have been observed in nature.

'We had no idea the simulated results would be so beautiful and complex, and then we found out that observations were revealing brown dwarfs with disks that matched what we were seeing, ' said Shen, who is studying for her PhD in Physics & Astronomy at McMaster.

The simulated objects would either leave the stars on their own or in groups, or remain as multiple brown dwarf companions to a star. Telescopes have detected up to three brown dwarfs orbiting a regular star. Thus the brown dwarfs and planets in the simulations are remarkably similar to what is observed. However, it remains to be determined exactly how often such encounters occur in nature and what fraction of those encounters reliably produce brown dwarfs. For this, Shen and Wadsley are planning a much larger set of encounter simulations using SHARCNET's new supercomputers.

The research was supported by a grant from the Natural Science and Engineering Research Council of Canada.