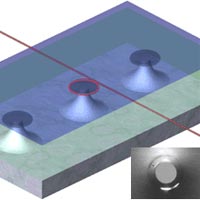 The Ultra-High-Q silica microtoroid is coupled to the fiber taper waveguide. After being immersed in either H2O or D2O, a cover slip is placed on top. The inset is an optical micrograph of an UHQ microtoroid immersed in water.

Scientists at the California Institute of Technology have created a new method of detecting heavy water that is 30 times more sensitive than any other existing method. The detection method could be helpful in the fight against international nuclear proliferation.

In the June 15 issue of the journal Optics Letters, Caltech doctoral student Andrea Armani and her professor Kerry Vahala report that a special type of tiny optical device can be configured to detect heavy water. Called an optical microresonator, the device is shaped something like a mushroom and was originally designed three years ago to store light for future opto-electronic applications. With a diameter smaller than that of a human hair, the microresonator is made of silica and is coupled with a tunable laser.

The technique works because of the difference between the molecular composition of heavy water and regular water. An H2O molecule has two atoms of hydrogen that each are built of a single proton and a single electron. A D2O molecule, by contrast, has two atoms of a hydrogen isotope known as deuterium, which differs in that each atom has a single neutron in addition to a proton and an electron. This makes a heavy-water molecule significantly more massive than a regular water molecule.

'Heavy water isn't a misnomer,' says Armani, who is finishing up her doctorate in applied physics and will soon begin a two-year postdoctoral appointment at Caltech. Armani says that heavy water looks just like regular water to the naked eye, but an ice cube made of the stuff will sink if placed in regular water because of its added density. This difference in masses, in fact, is what makes the detection of heavy water possible in Armani and Vahala's new technique. When the microresonator is placed in heavy water, the difference in optical absorption results in a change in the 'Q factor,' which is a number used to measure how efficiently an optical resonator stores light. If a higher Q factor is detected than one would see for normal water, then more heavy water is present than the typical one-in-6,400 water molecules that exists normally in nature.

The technique is so sensitive that one heavy-water molecule in 10,000 can be detected, Armani says. Furthermore, the Q factor changes steadily as the heavy-water concentrations are varied.

The results are good news for those who worry about the escalation of nuclear weapons, because heavy water is typically found wherever someone is trying to control a nuclear chain reaction. As a nuclear moderator, heavy water can be used to control the way neutrons bounce around in fissionable material, thereby making it possible for a fission reactor to be built.

The ongoing concern with heavy water is exemplified by the fact that Armani and Vahala have received funding for their new technique from the Defense Advanced Research Projects Agency, or DARPA. The federal agency provides grants to university research that has potential applications for U.S. national defense.

'This technique is 30 times better than the best competing detection technique, and we haven't yet tried to reduce noise sources,' says Armani. 'We think even greater sensitivities are possible.'