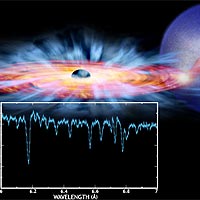 The X-ray spectrum (see inset) of a binary star system consisting of a black hole and a normal star indicates that turbulent winds of multimillion degree gas are swirling around the black hole. As the illustration shows, much of the hot gas is spiraling inward toward the black hole, but about 30% is blowing away.

The temperature and intensity of the winds imply that powerful magnetic fields must be present. These magnetic fields, likely carried by the gas flowing from the companion star, create magnetic turbulence that generates friction in the gaseous disk and drive winds from the disk that carry momentum outward as the gas falls inward. Magnetic friction also heats the gas in the inner part of the disk to X-ray emitting temperatures.

The analysis of the disk wind of GRO J1655-40, or J1655 for short, confirmed what astronomers had long suspected, namely that magnetic friction is central to understanding how black holes accrete matter rapidly. Without a process to take away some of the angular momentum of the gas, it could remain in orbit around a black hole for a very long time.

J1655 is a binary system that harbors a black hole with a mass seven times that of the sun, which is pulling matter from a normal star about twice as massive as the sun. The Chandra observation revealed a bright X-ray source whose spectrum showed dips produced by absorption from a wide variety of atoms ranging from oxygen to nickel. A detailed study of these absorption features shows that the atoms are highly ionized and are moving away from the black hole in a high-speed wind.

Understanding the importance of magnetic forces in the disk of gas around J1655 could have far-reaching implications, from the supermassive black holes associated with powerful quasars, to planet-forming disks around young sun-like stars.

A team of astronomers led by the University of Michigan may know how black holes are lighting up the Universe. New data from NASA's Chandra X-ray Observatory show, for the first time, that powerful magnetic fields are the key to these brilliant and startling light shows.

It is estimated that up to half of the total radiation in the universe since the Big Bang comes from material falling towards super-massive black holes, including those powering quasars, the brightest known objects. For decades, scientists have struggled to understand how black holes, the darkest objects in the Universe, can generate such prodigious amounts of radiation.

New X-ray data from Chandra give the first clear explanation for what drives this process: magnetic fields. Chandra observed a black hole system in our galaxy, known as GRO J1655-40 (J1655, for short), where a black hole was pulling material from a companion star into a disk.

'By intergalactic standards, J1655 is in our backyard so we can use it as a scale model to understand how all black holes work, including the monsters found in quasars,' said Jon Miller, assistant professor at U-M, whose paper on these results appears in this week's issue of the journal Nature.

If gas in a disk around a black hole loses energy, it will swirl toward the black hole, generating light along the way. Scientists have long thought that magnetic fields may drive this energy loss by generating friction in the gas and driving a wind from the disk that carries momentum outward, in an example of conservation of momentum.

By using Chandra spectra, that is, the amount of X-rays at different energies, Miller and his team showed that the speed and density of the wind from the disk in J1655 corresponded to computer simulation predictions for winds driven by magnetic fields. The spectral fingerprint also ruled out the two other major competing theories to magnetically-driven winds.

'In 1973, theorists came up with the idea that magnetic fields could drive the generation of light by black holes,' said co-author John Raymond of the Harvard-Smithsonian Center for Astrophysics (CfA) in Cambridge, Mass. 'Now, over 30 years later, we finally may have proof.'

This deeper understanding of how black holes accrete matter also teaches astronomers about other properties of black holes, including how they grow.

'Just as a doctor wants to understand the causes of an illness and not merely the symptoms, astronomers try to understand what causes phenomena they see in the Universe,' said co-author Danny Steeghs also of the CfA. 'By understanding what makes material fall onto black holes and its energy released, we may also learn how it plunges onto other important objects.'

In addition to accretion disks around black holes, magnetic fields may play an important role in disks detected around young Sun-like stars where planets are forming as well as ultra-dense objects called neutron stars.

News Story Origin and Copyright: UMichigan
Click here for the original news release.
'On the mountains of truth you can never climb in vain: either you will reach a point higher up today, or you will be training your powers so that you will be able to climb higher tomorrow.'