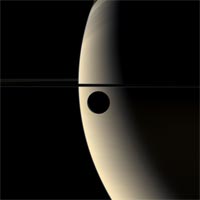 The cold, icy orbs of the Saturn system come to life in a slew of new movie clips from the Cassini spacecraft showing the ringed planet's moons in motion.

In addition to their drama and visual interest, scientists use these movies to refine their understanding of the orbits of Saturn's moons. Engineers at NASA's Jet Propulsion Laboratory, Pasadena, Calif., use the same images, and the orbital positions of the moons, to help them navigate Cassini. The spacecraft is nearing the halfway mark of its prime four-year tour of Saturn and its moons.

Still images and five short movie sequences acquired over the past six months are being released today at: http://www.nasa.gov/cassini , http://saturn.jpl.nasa.gov and http://ciclops.org .

The Cassini-Huygens mission is a cooperative project of NASA, the European Space Agency and the Italian Space Agency. The Jet Propulsion Laboratory, a division of the California Institute of Technology in Pasadena, manages the Cassini-Huygens mission for NASA's Science Mission Directorate, Washington. The Cassini orbiter and its two onboard cameras were designed, developed and assembled at JPL. The imaging team is based at the Space Science Institute, Boulder, Colo.