Can you hear me now? Not on Mars 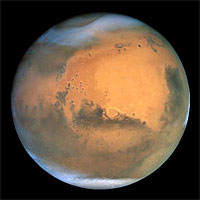 It may be difficult for two people to have a conversation on Mars, according to a research paper by Penn State graduate student in acoustics Amanda Hanford and Lyle Long, professor of aerospace engineering.

'Sound doesn't travel very far on Mars,' explained Hanford, an acoustics doctoral degree candidate. The work is detailed in the paper, 'Computer Simulations of the Propagation of Sound on Mars,' and was recently presented at the 151st Acoustical Society of America meeting in Providence, R.I. Long is Hanford's graduate adviser.

Using a direct simulation Monte Carlo (DSMC) method, Hanford and Long took into account the Martian atmospheric composition, as well as the lower atmospheric pressure of Mars and temperature differences.

'In studying sound on Mars, the physical properties of sound are the same,' Hanford said, adding that Earth and Mars also share some physical similarities. The simulation predicted that sound on Mars has a lower pitch and very short distance.

She said a sound's lower pitch is the result of the differences in the speed of sound. This is because of the Red Planet's atmospheric makeup -- mostly carbon dioxide, with small percentages of nitrogen and argon with trace amounts of water vapor and oxygen.

'When you breathe in a helium balloon and speak, your voice is a high pitch,' Hanford explained. 'Assuming you could breathe in carbon dioxide (which is very toxic), your voice would be a lower pitch.'

The distance sound can travel is also greatly affected by the Martian atmosphere.

'The lower pressure makes it so sound doesn't travel far,' she said. According to the paper, sound generated by a human scream on Earth can travel a little over a kilometer before being absorbed by the atmosphere. On Mars, the sound from that same scream would only move about 16 yards at best.

Hanford created a downloadable movie clip of a DSMC-simulated sound wave propagating in the Martian atmosphere and its rate of decay. The clip can be found at http://www.acoustics.org/press/151st/Hanford.html online.

The last attempt to record sound on Mars was part of the NASA's Mars Polar Lander, launched in January 1999. The probe included a miniature microphone to record sounds on the Martian surface. Communication with the lander was lost after it entered the Martian atmosphere on Dec. 3, 1999.

NASA and the National Science Foundation supported the work.