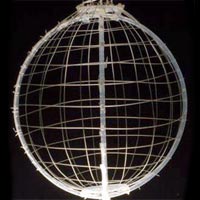 A sphere-shaped web of photo-detecting fibers developed by MIT scientists can sense the optical properties of the entire volume of space around it, as well as detect the source of incoming light.

In a radical departure from conventional lens-based optics, MIT scientists have developed a sophisticated optical system made of mesh-like webs of light-detecting fibers. The fiber constructs, which have a number of advantages over their lens-based predecessors, are currently capable of measuring the direction, intensity and phase of light (a property used to describe a light wave) without the lenses, filters or detector arrays that are the classic elements of optical systems such as eyes or cameras.

Ultimately the researchers expect the new system will be capable of much more, with potential applications ranging from improved space telescopes to clothing that provides situational awareness to soldiers or even the visually impaired.

The transparent fiber-webs could even enable huge computer screens to be activated with beams of light instead of the touch of a finger. 'We could use light to enhance interaction with computers and even gaming systems,' said Professor Yoel Fink of the Department of Materials Science and Engineering and the Research Lab of Electronics, leader of the team. 'It's intriguing--the idea of touching with light.'

The scientists report the work in the June 25 online edition of Nature Materials, and it is featured on the cover of the July print issue of the magazine.

The human eye, digital and film cameras, and even the Hubble space telescope rely on lenses and detector surfaces (like the retina) to create images. But while these systems deliver excellent images, they are constrained by their size, weight, fragility and limited field of view.

In contrast, the fiber webs are flexible and lightweight. Plus, a fiber web in the shape of a sphere can sense the entire volume of space around it, according to Fink.

In addition to having an unlimited field of view, the fiber sphere can also detect the direction of incoming light. Light enters the transparent sphere at one point and exits at another, providing a directional reference back to the light source.

Fink's team has also created a flat, two-dimensional web of fibers and placed two such webs in parallel. These constructs, which can measure the intensity of incoming light, are capable of generating rough images of objects placed near them, such as the shape of a letter 'E' cut stencil-like from paper and lit from behind. The image shows up on a computer screen, reconstructed from a light intensity distribution measured by the webs.

The fibers used in the webs are about 1 millimeter in diameter. They consist of a photoconductive glass core with metal electrodes that run along the length of the core, all surrounded by a transparent polymer insulator.

The fibers can detect light anywhere along their length, producing a change in current in an external electrical circuit. While one fiber on its own cannot detect the exact location of an incoming beam of light, when many fibers are arrayed in a web, their points of intersection provide the exact coordinates of the beam. A computer assimilates the data generated by the web and translates it for the user. If the fibers were woven into a textile, for instance, an embedded computer could provide information on a small display screen or even audibly.

Improving the imaging power of the fiber webs will require reducing the diameter of the fibers and creating denser webs. Fink says he's not certain whether the new technology will one day replicate human vision. 'Just the idea of imaging with a transparent object is a true eye opener,' he said.

This work is funded by the MIT Institute for Soldier Nanotechnologies, the U.S. Department of Energy, the Defense Advanced Research Projects Agency, and the National Science Foundation.

News Story Origin and Copyright: MIT
Click here for the original news release.
'The mathematician's patterns, like the painter's or the poets, must be beautiful; the ideas, like the colours or the words, must fit together in a harmonious way. Beauty is the first test: there is no permanent place in the world for ugly mathematics.'