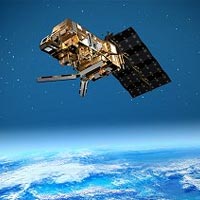 The MetOp series of three satellites will be Europe's first polar-orbiting missions dedicated to operational meteorology and represents the European commitment to a new venture with the United States. They will be launched sequentially providing data until at least 2020. The first, MetOp-A, is being launched on 17 July 2006 on a Soyuz rocket from the Baikonur Cosmodrome in Kazakhstan.

MetOp-A, the first member of a new family of European satellites designed to monitor the Earth’s atmosphere from low Earth orbit, is to be launched from Baikonur, Kazakhstan, on 17 July.

It will complement Europe’s already highly successful Meteosat satellites in geostationary orbit and form part of an integrated system to be run with the USA to provide better weather and climate information.

The MetOp satellite series is a joint programme by the European Space Agency (ESA) and the European Meteorological Satellite Organisation (Eumetsat), with the latter to operate the spacecraft once in orbit. These new satellites will form the space segment of the Eumetsat Polar System (EPS) and probe the atmosphere with high accuracy from a sun-synchronous orbit. They will circle the globe from pole to pole at an altitude of about 817 km, collecting high- resolution data to complement the hemispheric survey of the atmosphere conducted from geostationary orbit by the Meteosat system.

These new European satellites will be operated in partnership with the US National Oceanic and Atmospheric Administration (NOAA) polar weather satellite system, providing data that will be used to monitor the planet’s climate and improve weather forecasting. NOAA satellites will operate the 'afternoon shift' (i.e. cross the equator in the afternoon, local time), with Europe’s MetOp taking over the 'morning orbit' service.

The MetOp spacecraft have been developed and built by an industrial team led by EADS Astrium in Toulouse, France. Three flight models have been ordered and essentially completed, and will be launched sequentially in order to ensure continuous data delivery up to the 2020 timeframe. Each satellite is 6.5-m high and weighs about 4 tonnes at launch. MetOp-A, the first spacecraft in the series, is carrying 11 instruments, many of which are highly complementary.

This payload includes a new generation of European instruments – provided by ESA, Eumetsat, and the French Space Agency (CNES) – to deliver improved remote-sensing capabilities to both meteorologists and climatologists. The IASI spectrometer will provide highly accurate temperature and humidity profile measurements, the Gome-2 spectrometer will probe the atmosphere for ozone and trace gas concentrations, the Ascat scatterometer will measure wind speed and direction on the ocean surface, and the Gras payload will provide atmospheric profiles using the occultation of radio signals from GPS satellites. The MHS instrument, replacing the AMSU-B instrument carried on previous US satellites, will give microwave measurements of humidity.

In addition, the satellite incorporates a set of 'heritage' instruments provided by the USA: the AVHRR radiometer for global imagery, the AMSU-A microwave sounder, the HIRS infrared sounder, an advanced Argos data collection system, a Search & Rescue package and the SEM-2 spectrometer to monitor charged particle flux in space, or so-called 'space weather'.

The first MetOp satellite is currently in Baikonur, Kazakhstan, where it is undergoing final preparation before its launch onboard a Russian Soyuz ST/Fregat vehicle on 17 July. Lift-off is scheduled for 18:28 CEST (16:28 GMT).

ESA TV will provide a live transmission of the launch from three locations: ESOC, Eumetsat Headquarters, and the Baikonour Cosmodrome. It will be available on two satellite channels, one for the general public on Hot Bird (for details, see http:://television.esa.int/photos/Eutelsat4.pdf) and the other for broadcasters on Eutelsat W2. There will also be a clean feed of lift-off images from Baikonur (for details of both, see http://television.esa.int, as from 14 July).