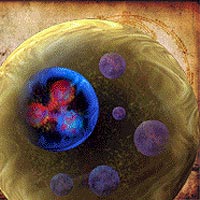 In hypernuclear experiments, scientists are looking at those instances in which an electron strikes a proton with enough energy to transform it into two new particles: a kaon and a lambda hyperon. The original electron and the new kaon fly out of the nucleus, leaving the lambda hyperon behind. In this way, physicists have added an impurity to the nucleus — a lambda hyperon — that they can use to study the nucleus' structure.

In 1827, Robert Brown observed that pollen grains floating in a drop of water jiggled constantly. The phenomenon became known as Brownian motion. Over 75 years later, Einstein proposed that the pollen grains were being jostled by the molecules of water. The impurity (pollen grains) Brown had added to the water allowed Einstein to deduce the presence of individual water molecules and describe at least one of their properties.

Today's nuclear physicists are using the same concept to study the nucleus of the atom. They're using Jefferson Lab's CEBAF accelerator to add an impurity — a special type of particle called a hyperon — to the nucleus. It's hoped that probing the nucleus in this manner, referred to as hypernuclear studies, will provide new insights into the structure of matter.

In both experiments, a beam of electrons is sent careening into the nuclei of a target element. Scientists are looking at those instances in which an electron strikes a proton with enough energy to transform it into two new particles: a kaon and a lambda hyperon. The original electron and the new kaon fly out of the nucleus, leaving the lambda hyperon behind. In this way, physicists have added an impurity to the nucleus — a lambda hyperon — that they can use to study the nucleus' structure.
Nebula

'They open a window in the study of the particles and fundamental forces of nature,' says Franco Garibaldi, a Hypernuclear Collaboration spokesperson, head of the Nuclear Physics Unit of the Italian National Institute of Health's Department of Technology, and associated with Italy's Istituto Nazionale di Fisica Nucleare (INFN), 'By studying the propagation of this impurity in the nucleus, you can see a configuration of these nuclei that you can't see any other way.'

Osamu Hashimoto, a Hall C user from Tohoku University in Japan and a spokesperson for HKS, says that's because the hyperon is so much like the nucleus' ordinary constituents, with one major difference. 'The lambda hyperon is very similar to a proton or a neutron, but it has a strange quark,' he says. Like the proton, the lambda hyperon is built of three quarks held together by a swarm of gluons. However, instead of one down and two up quarks, a hyperon contains one each of the up, down and strange quarks.

The lambda hyperon is an excellent probe of the structure of the nucleus, because it can travel deeper inside the nucleus than many other particles. New protons and neutrons are blocked from traveling very far into the nucleus by the rules of quantum mechanics (physicists call this phenomenon Pauli blocking). It's like trying to find a seat on a train. Once all the seats in one car are filled up, passengers have to move on to the next car for a spot. Each particle entering the nucleus is only allowed to sit in a certain kind of seat. The only open seats for new protons and neutrons entering the nucleus are on the outer edges, because all their seats farther in are filled up.

But hyperons aren't ordinarily found in the nucleus, so there are open seats for these particles throughout the nucleus, allowing them to probe far deeper than most other particles. Larry Cardman, JLab Associate Director of Experimental Nuclear Physics, says this makes hypernuclear experiments unique.'We have yet to find a better way to probe this deeply into the structure of the atomic nucleus,' he comments.

John LeRose, a Hall A staff scientist and a spokesperson on Hall A's hypernuclear experiment says that creating hyperons in nuclei will allow researchers to probe the strong force, the force that glues quarks, and perhaps even protons and neutrons in the nucleus, together. 'The fact that it's different from a proton or a neutron gives you a different handle on the strong interaction, because you'll see that it will do things a little differently,' he explains.

For instance, adding a hyperon to the nucleus changes its dynamics. It's thought that the hyperon will draw the protons and neutrons closer together, causing the nucleus itself to shrink and condense. JLab's Chief Scientist, Tony Thomas, says this is creating a state that can be uniquely studied at JLab. 'You can't change the nuclear density without smashing together very energetic particles into a hot mishmash or getting inside a neutron star. The hypernuclear experiments allow us to change nuclear density without changing the nucleus into an extremely exotic form of matter,' he says.

To study the lambda hyperon and how its behavior in the nucleus differs from that of protons and neutrons, researchers look to its partner, the kaon that was also produced in the initial collision. Both experiments designed and built novel equipment to study hypernuclei by cleanly detecting kaons.

In Hall A, the Hypernuclear Collaboration built new septum magnets and added the Ring-Imaging Cherenkov detector (RICH) to Hall A's standard equipment. The septum magnets were used to divert some of the particles from the collisions onto a path that would take them into the left or right arm of Hall A's High Resolution Spectrometers. 'We had the High Resolution Spectrometers - but they only go to 12.5 degrees, and we wanted to go to 6 degrees. So we're talking about septum magents: [they have] a lot of magnetic field in a small space, and you don't have a lot of real estate to play with. So that was a technical challenge,' says LeRose. The right arm recorded the electrons from CEBAF that collided with nuclei in the target, and the left arm contained the RICH detector (for an in-depth look, visit RICH detector link).

As they entered RICH, the particles flew through a chamber filled with freon. Those that were traveling faster than light speed through the freon gave off a shower of radiation (Cherenkov radiation). The radiation splashed onto the RICH detector, much like a rain drop splashing on pavement. 'When the charged particle goes through, it projects a ring on your detector, and so you detect a ring. And the radius of the ring tells you whether it's a proton, or a pion or a kaon. If it's got a big ring, it's a pion; if it's got a little ring, it's a proton; and if it's in between, it's a kaon,' says LeRose.

The septum magnets, the RICH detector, and one of the targets used in the experiment were mostly funded by INFN at a cost of over $1.5 million. Some of the new equipment has already been used by several experiments and is planned for use in many more. The RICH detector was built entirely in Rome using the CsI evaporation facility that was developed by the Italian National Institute of Health for nuclear medicine applications. The detector was then shipped to the Lab for the experiment.

In Hall C, the High Resolution Kaon Spectrometer (HKS) was designed and built to detect the kaons. It uses a series of sophisticated magnets to bend the paths of all of the particles entering it and a series of Cherenkov radiation chambers. Together, these components allowed the spectrometer's detectors to separate out the signals from other particles, leaving just the signals of the kaons.

The High Resolution Kaon Spectromter (HKS) in Hall C was built over a period of four years by the experiment's more than 80 collaborators at a cost of about three million dollars. The project was funded by Japan's Ministry of Education, Culture, Sports, Science and Technology. The magnets and detector package were originally built in Japan and shipped to Jefferson Lab. A separate spectrometer measured the electrons from CEBAF that collided with nuclei in the target. (For the full story on HKS, visit: http://www.jlab.org/news/news_letter/2005/FebMar2005.pdf)

Both experiments ran over the summer last year. Now the collaborations are busily crunching the data from their recent runs, and both are preparing to announce final results. In the meantime, the hypernuclear physicists are already planning for the future. Liguang Tang, a Hall C staff scientist, full professor at Hampton University and a spokesperson for HKS, says the two collaborations are working toward the same goal. 'Eventually, to the 12 GeV Upgrade and somewhere beyond, the two collaborations will merge, and we will work together.'