Honey, I Shrunk the Solar System 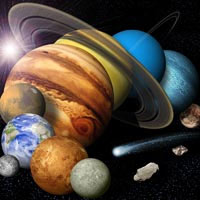 If you woke up Thursday morning and sensed something was different about the world around you, you're absolutely right. Pluto is no longer a planet.

The International Astronomical Union, wrapping up its meeting in Prague, Czech Republic, has resolved one of the most hotly-debated topics in the cosmos by approving a specific definition that gives our solar system eight planets, instead of the nine most of us grew up memorizing.

NASA has already visited all eight planets that retain their official title: Mercury, Venus, Earth, Mars, Jupiter, Saturn, Uranus and Neptune. In addition, the agency has its New Horizons spacecraft en route to Pluto, which the astronomical union has designated as the prototype for a new class of celestial objects, to be called 'dwarf planets.'

'NASA will, of course, use the new guidelines established by the International Astronomical Union,' said Dr. Paul Hertz, Chief Scientist for the Science Mission Directorate at NASA Headquarters. 'We will continue pursuing exploration of the most scientifically interesting objects in the solar system, regardless of how they are categorized.'

Ceres, which orbits in a belt between Mars and Jupiter and is the largest known asteroid, is one of those interesting objects. In 2007, NASA will launch the Dawn spacecraft on a mission to study Ceres, which the astronomers have placed in the dwarf planet category, alongside Pluto. The dwarf planet family also includes 2003 UB313, nicknamed 'Xena.' When Dr. Mike Brown of Caltech and his colleagues announced last summer that they'd discovered the object, which is bigger and farther away than Pluto, many astronomers decided it was time to figure out once and for all, 'What exactly is a planet, anyway?'

Here's how it all shakes out. The International Astronomical Union has decided that, to be called a planet, an object must have three traits. It must orbit the sun, be massive enough that its own gravity pulls it into a nearly round shape, and be dominant enough to clear away objects in its neighborhood.

To be admitted to the dwarf planet category, an object must have only two of those traits -- it must orbit the sun and have a nearly round shape. And no, moons don't count as dwarf planets. In addition to Pluto, Ceres and 2003 UB313, the astronomical union has a dozen potential 'dwarf planets' on its watchlist.

What's to become of the other objects in our solar system neighborhood, the ones that are not planets, not dwarf planets and not moons? The organization has decided that most asteroids, comets and other small objects will be called 'small solar-system bodies.'

Despite the establishment of these three distinct categories, there are bound to be gray areas. As technologies improve and more objects are found, the International Astronomical Union will set up a process to decide which of the three categories are most appropriate for specific objects.

Even before the discovery of Xena, not all was calm in the planetary world. There was debate after Clyde Tombaugh discovered Pluto in 1930. With its small size, distant location and odd orbit, some questioned whether Pluto was really a planet or just an icy remnant of the planet-forming process.

That issue has been resolved by the International Astronomical Union. Among those most keenly following the debate -- Mike Brown, who has been awaiting word on Pluto and the object he found, Xena.

'I'm of course disappointed that Xena will not be the tenth planet, but I definitely support the IAU in this difficult and courageous decision,' said Brown. 'It is scientifically the right thing to do, and is a great step forward in astronomy.'

Although the revamping of our solar system might seem unsettling, it's really nothing new. In fact, when Ceres was first discovered in 1801, it was called a planet, as were several similar objects found later. But when the count kept on growing, astronomers decided 'enough is enough,' and they demoted Ceres and its siblings, placing them in a new category, called asteroids.