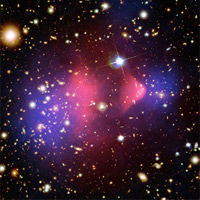 This composite image shows the galaxy cluster 1E 0657-56, also known as the'bullet cluster.' This cluster was formed after the collision of two large clusters of galaxies, the most energetic event known in the universe since the Big Bang.

Hot gas detected by Chandra in X-rays is seen as two pink clumps in the image and contains most of the 'normal,' or baryonic, matter in the two clusters. The bullet-shaped clump on the right is the hot gas from one cluster, which passed through the hot gas from the other larger cluster during the collision. An optical image from Magellan and the Hubble Space Telescope shows the galaxies in orange and white. The blue areas in this image show where astronomers find most of the mass in the clusters. The concentration of mass is determined using the effect of so-called gravitational lensing, where light from the distant objects is distorted by intervening matter. Most of the matter in the clusters (blue) is clearly separate from the normal matter (pink), giving direct evidence that nearly all of the matter in the clusters is dark.

The hot gas in each cluster was slowed by a drag force, similar to air resistance, during the collision. In contrast, the dark matter was not slowed by the impact because it does not interact directly with itself or the gas except through gravity. Therefore, during the collision the dark matter clumps from the two clusters moved ahead of the hot gas, producing the separation of the dark and normal matter seen in the image. If hot gas was the most massive component in the clusters, as proposed by alternative theories of gravity, such an effect would not be seen. Instead, this result shows that dark matter is required.

Dark matter and normal matter have been wrenched apart by the tremendous collision of two large clusters of galaxies. The discovery, using NASA's Chandra X-ray Observatory and other telescopes, gives direct evidence for the existence of dark matter.

'This is the most energetic cosmic event, besides the Big Bang, which we know about,' said team member Maxim Markevitch of the Harvard-Smithsonian Center for Astrophysics in Cambridge, Mass.

These observations provide the strongest evidence yet that most of the matter in the universe is dark. Despite considerable evidence for dark matter, some scientists have proposed alternative theories for gravity where it is stronger on intergalactic scales than predicted by Newton and Einstein, removing the need for dark matter. However, such theories cannot explain the observed effects of this collision.

'A universe that's dominated by dark stuff seems preposterous, so we wanted to test whether there were any basic flaws in our thinking,' said Doug Clowe of the University of Arizona at Tucson, and leader of the study. 'These results are direct proof that dark matter exists.'

In galaxy clusters, the normal matter, like the atoms that make up the stars, planets, and everything on Earth, is primarily in the form of hot gas and stars. The mass of the hot gas between the galaxies is far greater than the mass of the stars in all of the galaxies. This normal matter is bound in the cluster by the gravity of an even greater mass of dark matter. Without dark matter, which is invisible and can only be detected through its gravity, the fast-moving galaxies and the hot gas would quickly fly apart.

The team was granted more than 100 hours on the Chandra telescope to observe the galaxy cluster 1E0657-56. The cluster is also known as the bullet cluster, because it contains a spectacular bullet-shaped cloud of hundred-million-degree gas. The X-ray image shows the bullet shape is due to a wind produced by the high-speed collision of a smaller cluster with a larger one.

In addition to the Chandra observation, the Hubble Space Telescope, the European Southern Observatory's Very Large Telescope and the Magellan optical telescopes were used to determine the location of the mass in the clusters. This was done by measuring the effect of gravitational lensing, where gravity from the clusters distorts light from background galaxies as predicted by Einstein's theory of general relativity.

The hot gas in this collision was slowed by a drag force, similar to air resistance. In contrast, the dark matter was not slowed by the impact, because it does not interact directly with itself or the gas except through gravity. This produced the separation of the dark and normal matter seen in the data. If hot gas was the most massive component in the clusters, as proposed by alternative gravity theories, such a separation would not have been seen. Instead, dark matter is required.

'This is the type of result that future theories will have to take into account,' said Sean Carroll, a cosmologist at the University of Chicago, who was not involved with the study. 'As we move forward to understand the true nature of dark matter, this new result will be impossible to ignore.'

This result also gives scientists more confidence that the Newtonian gravity familiar on Earth and in the solar system also works on the huge scales of galaxy clusters.

'We've closed this loophole about gravity, and we've come closer than ever to seeing this invisible matter,' Clowe said.

These results are being published in an upcoming issue of The Astrophysical Journal Letters. NASA's Marshall Space Flight Center, Huntsville, Ala., manages the Chandra program for the agency's Science Mission Directorate. The Smithsonian Astrophysical Observatory controls science and flight operations from the Chandra X-ray Center, Cambridge, Mass.