Changes in Solar Brightness Too Weak to Explain Global Warming 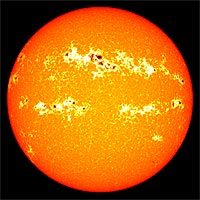 In this image from an active solar period in March 2001, colors are shifted to highlight the contrast between sunspots (black and dark red) and the faculae that surround them (bright yellow). During the peak of the 11-year solar cycle, the expansion of faculae outweighs the darkening from increased sunspot activity. The result is a net increase in solar brightness.

Changes in the Sun's brightness over the past millennium have had only a small effect on Earth's climate, according to a review of existing results and new calculations performed by researchers in the United States, Switzerland, and Germany.

The review, led by Peter Foukal (Heliophysics, Inc.), appears in the September 14 issue of Nature. Among the coauthors is Tom Wigley of the National Center for Atmospheric Research. NCAR’s primary sponsor is the National Science Foundation.

“Our results imply that, over the past century, climate change due to human influences must far outweigh the effects of changes in the Sun's brightness,” says Wigley.

Reconstructions of climate over the past millennium show a warming since the 17th century, which has accelerated dramatically over the past 100 years. Many recent studies have attributed the bulk of 20th-century global warming to an increase in greenhouse gas concentrations in the atmosphere. Natural internal variability of Earth’s climate system may also have played a role. However, the discussion is complicated by a third possibility: that the Sun's brightness could have increased.

The new review in Nature examines the factors observed by astronomers that relate to solar brightness. It then analyzes how those factors have changed along with global temperature over the last 1,000 years.

Brightness variations are the result of changes in the amount of the Sun’s surface covered by dark sunspots and by bright points called faculae. The sunspots act as thermal plugs, diverting heat from the solar surface, while the faculae act as thermal leaks, allowing heat from subsurface layers to escape more readily. During times of high solar activity, both the sunspots and faculae increase, but the effect of the faculae dominates, leading to an overall increase in brightness.

The new study looked at observations of solar brightness since 1978 and at indirect measures before then, in order to assess how sunspots and faculae affect the Sun’s brightness. Data collected from radiometers on U.S. and European spacecraft show that the Sun is about 0.07 percent brighter in years of peak sunspot activity, such as around 2000, than when spots are rare (as they are now, at the low end of the 11-year solar cycle). Variations of this magnitude are too small to have contributed appreciably to the accelerated global warming observed since the mid-1970s, according to the study, and there is no sign of a net increase in brightness over the period.

To assess the period before 1978, the authors used historical records of sunspot activity and examined radioisotopes produced in Earth's atmosphere and recorded in the Greenland and Antarctic ice sheets. During periods of high solar activity, the enhanced solar wind shields Earth from cosmic rays that produce the isotopes, thus giving scientists a record of the activity.

The authors used a blend of seven recent reconstructions of Northern Hemisphere temperature over the past millennium to test the effects of long-term changes in brightness. They then assessed how much the changes in solar brightness produced by sunspots and faculae (as measured by the sunspot and radioisotope data) might have affected temperature. Even though sunspots and faculae have increased over the last 400 years, these phenomena explain only a small fraction of global warming over the period, according to the authors.

Indirect evidence has suggested that there may be changes in solar brightness, over periods of centuries, beyond changes associated with sunspot numbers. However, the authors conclude on theoretical grounds that these additional low-frequency changes are unlikely.

“There is no plausible physical cause for long-term changes in solar brightness other than changes caused by sunspots and faculae,” says Wigley.

Apart from solar brightness, more subtle influences on climate from cosmic rays or the Sun's ultraviolet radiation cannot be excluded, say the authors. However, these influences cannot be confirmed, they add, because physical models for such effects are still too poorly developed.