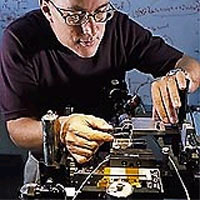 How do you weigh a dust mite? Or determine the force required to pull a molecule apart? Such tasks require a device that measures nanonewtons—forces 1 billion times smaller than the force required to hold an apple against Earth’s gravity. Nanonewton forces are estimated with atomic force microscopes and instruments that measure the properties of ultrathin coatings like those used on computer hard drives or turbine blades. But the accuracy of such estimates is unknown because they haven’t been calibrated with force standards based on the kilogram, the internationally accepted unit of mass.

Luckily, there is hope on the horizon. In a paper presented June 4 at the annual conference of the Society of Experimental Mechanics in Charlotte, N.C., National Institute of Standards and Technology (NIST) engineers describe a prototype instrument that reliably measures forces as small as tens of nanonewtons and simultaneously ties those measurements to forces a thousand times larger based on the kilogram. The device works by connecting a well-calibrated spring-loaded scale with a set of electrodes that generates an electrostatic force. The instrument balances the downward force produced by a one-milligram mass artifact, by keeping the distance between the electrodes constant but varying the amount of voltage between them. The result is a force determination accurate to a few parts in 10,000 that is measured with voltage, electrical capacitance and distance (the location of the electrodes as measured in wavelengths of laser light). "It is much easier to make small changes in voltages, than to make small mass standards," explains NIST mechanical engineer Jon Pratt.

The NIST researchers hope to extend the instrument’s resolution to tens of piconewtons (trillionths of a newton).