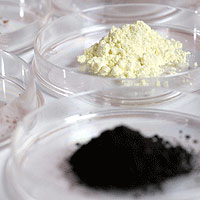 Oxides of three rare earth materials are being studied for possible use in the production of small-scale quantities of hydrogen for powering fuel cells. Georgia Tech Photo: Gary Meek

A unique group of oxide materials that readily gives up and accepts oxygen atoms with changes in temperature could be the basis for a small-scale hydrogen production system able to power fuel cells in homes -- and potentially in automotive applications.

Scientists have long known that oxides of the rare earth elements cerium (Ce), terbium (Tb), and praseodymium (Pr) can produce hydrogen from water vapor and methane in continuous "inhale and exhale" cycles. By doping iron atoms into the oxides, researchers at the Georgia Institute of Technology have lowered the temperatures at which these "oxygen pump" materials produce hydrogen, potentially allowing the process to be powered by solar energy.

This promising early-stage research was reported in the journal Advanced Materials 15 (2003) pp 521-526.

"This is a new approach for producing hydrogen that has several advantages compared to conventional production technology," said Zhong L. Wang, a professor in Georgia Tech's School of Materials Science and Engineering and director of the Center for Nanoscience and Nanotechnology. "For some applications, particularly those in the home, this could provide an alternative way to supply hydrogen for small-scale fuel cells."

By operating at lower temperatures, the oxide system being developed at Georgia Tech could provide a lower-cost alternative that uses less energy and less water to operate.

The system would take advantage of the oxides' unique crystalline structure, which allows as much as 20 percent of the oxygen atoms to leave the lattice without structural damage. That would permit cycling oxygen atoms out of and back into the structure through a sequence of oxidation and reduction processes that both produce hydrogen, first from methane and then from water vapor. By providing an oxygen supply, the oxide system could reduce the amount of water required for hydrogen production.

First, temperatures of 700 degree Celsius drive oxygen out of the material, where it oxidizes carbon in the methane to form carbon oxides and free hydrogen. Temperatures as low as 375 degrees Celsius are then used to reduce water vapor, pulling oxygen from water to replenish the crystalline structure -- producing more hydrogen.

"By cycling the temperature back and forth in the presence of methane or water, you can continuously produce hydrogen," Wang said.

Although the use of rare-earth oxides such as cerium oxide as catalysts for hydrogen production has been known for some time, the addition to iron to those oxides by the Georgia Tech researchers has significantly enhanced the surface chemistry activity of these materials, allowing the oxidation and reduction reactions to take place at lower temperatures. Wang believes the reaction temperatures may be lowered farther by "tuning" the iron content and understanding the trade-offs between reaction efficiency and temperature.

Lowering the reaction temperature to 350 degrees could allow solar energy to supply at least some of the heat needed. Relying on the use of a renewable energy source could make the process more attractive to home users and remote locations.

"If you can get the temperature low enough, this would facilitate hydrogen production with renewable energy," Wang noted. "If you can use solar energy to produce hydrogen, that opens up a lot of new possibilities."

Using a small laboratory furnace, Wang and collaborator Zhenchuan Kang cycled test materials through the temperature changes over a period of hours to study reaction dynamics. In a larger furnace, the temperature swings could be produced more rapidly. Wang envisions scaling up the process using a larger furnace in which the oxide materials could be shuttled back and forth between temperature zones for alternating oxidation and reduction reactions.

Wang has not observed sharp transition in the efficiency of the reaction as a function of temperatures, but rather temperature zones within which the oxidation or reaction reactions occur with varying efficiencies.

Though the process might be scaled up to produce large volumes of hydrogen, Wang believes its true promise is for small-scale systems. "In many cases, high volume is not what you need, especially when you consider cost and energy input," he said. "We are excited about this technology and its potential applications for the new hydrogen economy."

For the future, Wang wants to optimize iron doping and study the tradeoff between reaction temperature and efficiency. Lower reaction efficiency could be tolerated if it allowed the use of solar energy for a portion of the process, he notes.

"The next step is to find the optimal level of iron doping and how low the temperature can go while still producing hydrogen," Wang said. "There is a large amount of tuning possible for the iron doping."