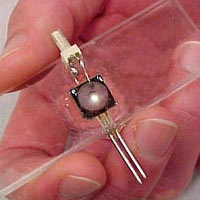 The micro-electromechanical device can function as a 'canary on a chip' to signal cell death. (Photos courtesy of Yong Huang)

In experiments conducted at the University of California, Berkeley, researchers have found a way to tap into the telltale electrical signals that mark cell death, opening the door to the creation of a "canary on a chip" that can be used to sound the alarm of a biochemical attack or test drug toxicity on human tissue.

In a study appearing in the June 15 issue of Sensors and Actuators, researchers used a microchip to electrically determine cell viability by detecting changes in the electrical resistance of a cell membrane within milliseconds after it is exposed to a toxic agent. They found that after a cell is exposed to a toxin, its electrical resistance experiences a quick spike before dropping dramatically when it dies.

"The beauty of the device is that it detects the viability of a cell directly and instantaneously," said Boris Rubinsky, professor of mechanical engineering and bioengineering at UC Berkeley and co-author of the study, which is now available online. "This MEMS (micro-electromechanical) device will be invaluable in the detection of a biochemical attack because there you don't have the luxury of time and analysis. It's a new technology that will act like a canary on a chip."

The study is a continuation of the bionic chip research, part of UC Berkeley's Center for Information Technology Research in the Interest of Society, pioneered by Rubinsky and his former graduate student, Yong Huang, who received his PhD in mechanical engineering in 2001.

Three years ago, Rubinsky and Huang invented a chip that merges a living biological cell with electronic circuitry. The bionic chip also exemplifies the type of advances made possible through the campus's Health Sciences Initiative, which combines research in diverse disciplines to launch innovations in health-related fields. The chip has since been patented by UC Berkeley and exclusively licensed to Excellin Life Sciences, a Milpitas-based biotech startup.

"This would benefit applications that rely upon the knowledge of whether a cell is alive or dead," said Huang, lead author of the current study and now the chief science officer of Excellin. "It has implications for use as a biochemical sensor that soldiers could wear on a nametag or that is stationed as a remote sensor in the field. Because this is a MEMS-based single-cell analysis technology, it's primed for miniaturization."

In this year's new design of the bionic chip, a cell essentially lives in a nutrient-rich culture between two electrodes on a silicon wafer. The electrodes continuously probe the cell membrane and track the amount of electrical current that is able to pass. An intact membrane will not allow ions to pass through, except in very constrained conditions.

"One of the properties of a dead cell is that the membrane becomes leaky," said Rubinsky. "It occurred to us that when the cell membrane breaks, it would allow various ions to move through the cell membrane and make a circuit that can be easily measured."

This change in membrane permeability forms the basis for traditional cell viability assays that use colorimetric or fluorescent dyes. The molecules of the dye can only pass through the membrane of dead cells. Drug researchers investigating a chemical's toxicity to cancer cells, for example, would look to see whether the dead cells appeared fluorescent through a microscope. The researchers used the traditional assays to help calibrate the bionic chip.

While the bionic chip has potential as a biochemical warning device, its possible use as a replacement for the traditional fluorescent dye assay may have more immediate impact, said Huang.

Excellin is pursuing the use of the bionic chip as a tool for basic research on cell death and as a drug toxicity assay.

Huang pointed out that the fluorescent dye assay only tells whether cells are alive or dead, shedding little light on what happens to the cell as it dies. The dyes also lack the sensitivity to measure what happens in a single cell.

"With the bionic chip, the cell produces a dynamic electrical signature so you can monitor the cell death process in real time," said Huang. "This has not been done before, particularly on a single cell level."

The researchers say the amount of cell membrane damage relates to the degree of ionic current, so the larger the damage, the greater the change in electrical resistance.

"Not only can you tell when a cell dies or not, you know to what degree there is membrane impairment by comparing the electric signals," said Huang. "That's very difficult to do without our technology."

"The traditional protocol requires the addition of a dye that has been prepared and incubated, it requires that the dye gets into the cell, and it requires a measurement that is lengthy and complicated," said Rubinsky. "With the bionic chip, you don't need to add anything, and reactions happen very fast. You simply need two electrodes that measure the current as opposed to some expensive dyes and expensive measurement devices. It's orders of magnitude faster. It's a matter of milliseconds or seconds compared with half an hour or more."

Other co-authors of the paper are Navdeep Sekhon and Ning Chen, former students at UC Berkeley's Department of Mechanical Engineering; and James Borninski, vice president of product development at Excellin.