A boost for solar cells with photon fusion 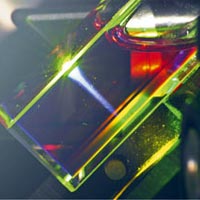 Experiment to show the changes in the wavelength. The green light directed into the solution reappears as blue light after it has been converted.

An innovative process that converts low-energy longwave photons (light particles) into higher-energy shortwave photons has been developed by a team of researchers at the Max Planck Institute for Polymer Research in Mainz and at the Sony Materials Science Laboratory in Stuttgart. With the skillful combination of two light-active substances, the scientists have, for the first time, manipulated normal light, such as sunlight, to combine the energy in photons with particular wavelengths (Physical Review Letters, October 4, 2006). This has previously only been achieved with a similar process using high-energy density laser light. The successful outcome of this process could lay the foundation for a new generation of more efficient solar cells.

The efficiency of solar cells today is limited, among other reasons, by the fact that the longwave, low-energy part of the sunlight cannot be used. A process that increases the low level of energy in the light particles (photons) in the longwave range, shortening their wave length, would make it possible for the solar cells to use those parts of light energy that, up to now, have been lost, resulting in a drastic increase in their efficiency. The equivalent has only been achieved previously with high-energy density laser light which, under certain conditions, combines two low-energy photons into one high-energy photon - a kind of photonic fusion.

This is a significant step forward for the scientists at the Max Planck Institute for Polymer Research and at the Sony Materials Science Laboratory. In developing this process, they have succeeded, for the first time, in pairing up photons from normal light, thus altering the wavelength. They used two substances in solution, platinum octaethyl porphyrin and diphenylan-thracene, which converted the longwave green light from a normal light source into shortwave blue light. Similar to the process in laser light, this also pairs up photons, but in a different way.

When a molecule is manipulated by laser light to take up two photons, which is only probable if it is literally bombarded with a laser beam of photons, the molecules in this case only receive one photon. Two photon partners are brought together between the molecules via a different mechanism called triplet-triplet annihilation. By selecting different, corresponding 'matchmaker' molecules, it is possible to combine the energy from photons from the entire sunlight spectrum.

The two substances developed by the researchers as 'photon matchmakers' have quite different properties. Whereas one serves as an 'antenna' for green light (antenna molecule), the other pairs the photons, connecting the two low-energy green photons into one high-energy blue photon, which it transmits as an emitter (emitter molecule).

This is what happens in detail: first the antenna molecule absorbs a green low-energy photon and passes it to the emitter molecule as a package of energy. Both molecules store the energy one after the other in 'excited' states. Then, two of the energy-loaded emitter molecules react with each other - one molecule passes its energy package to the other. This returns one molecule to its low-energy state. The other, conversely, achieves a very high-energy state that stores the double energy package. This state rapidly collapses when the large energy package is sent out in the form of a blue photon. Although this light particle is of a shorter wave length and higher in energy than the green light emitted initially, the end effect is that no energy is generated, but the energy from two photons is combined into one.

The process is very interesting in chemical terms as the molecules must be carefully matched to allow the energy to be transmitted efficiently, and neither the antenna nor the emitter molecules are allowed to lose their energy through shortcuts. The researchers therefore had to synthesize an antenna molecule that absorbed longwave light and store it for so long that the energy could be transferred to an emitter. Only a complex metal organic compound with a platinum atom in a ring-shaped molecule was suitable for this purpose. The emitter molecule, on the other hand, must be able to take the energy package from the antenna and hold on to it until another excited emitter molecule is found for the subsequent photon fusion.

As this procedure allows previously unused parts of sunlight to be used in solar cells, the scientists are hoping that it offers the ideal starting point for more efficient solar cells. To optimize the process and to bring it closer to an application, they are testing new pairs of substances for other colors in the light spectrum and are experimenting with integrating them in a polymer matrix.