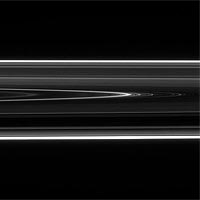 Saturn's D ring--the innermost of the planet's rings--sports an intriguing structure that appears to be a wavy, or 'vertically corrugated,' spiral. Image credit: NASA/JPL/Space Science Institute.

Imaging scientists see a structure in the outer part of the D ring that looks like a series of bright ringlets with a regularly spaced interval of about 30 kilometers (19 miles). An observation made by NASA's Hubble Space Telescope in 1995 also saw a periodic structure in the outer D ring, but its interval was then 60 kilometers (37 miles). Unlike many features in the ring system that have not changed over the last few decades, the interval of this pattern has been decreasing over time.

These findings are being presented today at the Division for Planetary Sciences Meeting of the American Astronomical Society held in Pasadena, Calif. Images are available at http://www.nasa.gov/cassini , http://saturn.jpl.nasa.gov and http://ciclops.org .

'This structure in the D ring reminds us that Saturn's rings are not eternal, but instead are active, dynamical systems, which can change and evolve,' said Dr. Matt Hedman, Cassini imaging team associate at Cornell University, Ithaca, N.Y.

When Cassini researchers viewed the D ring along a line of sight nearly parallel to the ringplane, they observed a pattern of brightness reversals: a part of the ring that appears bright on the far side of the rings appeared dark on the near side of the rings, and vice versa.

This phenomenon would occur if the region contains a sheet of fine material that is vertically corrugated, like a tin roof. In this case, variations in brightness would correspond to changing slopes in the rippled ring material.

Both the changes over time and the 'corrugated' structure of this region could be explained by a collision of a comet or meteoroid into the D ring, which then kicked out a cloud of fine particles. This cloud might have inherited some of the tilt of the colliding object's path as it slammed into the rings. An alternate explanation could be that the object struck an already inclined moonlet, shattering it to bits and leaving its debris in an inclined orbit.

In either case, the researchers speculate the aftermath of such a collision would be a ring slightly tilted relative to Saturn's equatorial plane. Over a period of time, as the inclined orbits of the ring particles evolve, this flat sheet of material would become a corrugated spiral that appears to wind up like a spring over time, which is what was observed.

Based on observations between 1995 and 2006, scientists reconstructed a timeline and estimated that the collision occurred in 1984.

The Cassini-Huygens mission is a cooperative project of NASA, the European Space Agency and the Italian Space Agency. The Jet Propulsion Laboratory, a division of the California Institute of Technology in Pasadena, manages the Cassini-Huygens mission for NASA's Science Mission Directorate, Washington. The Cassini orbiter and its two onboard cameras were designed, developed and assembled at JPL. The imaging team is based at the Space Science Institute, Boulder, Colo.