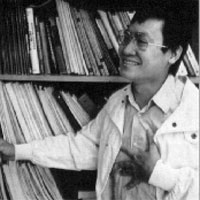 Physicists at Ohio State University may have explained some strange behavior of the ultra-cold material known as Bose-Einstein condensate (BEC).

The new analysis shows that scientists are closer than ever to harnessing BEC to perform useful functions such as quantum computing, said Tin-Lun Ho, professor of physics at Ohio State and the project's principal investigator.

Ho has pioneered theoretical studies of BEC, an entirely new form of matter that defies description as a solid, liquid, or gas. The condensate forms when atoms of a single chemical element such as rubidium are cooled to temperatures so low that they condense together. One glob of the material measures less than half the width of a human hair, and functions as a single atom, or "superatom," that operates under the laws of quantum physics.

Ho's work may help scientists understand how BEC could be used in quantum computing, making powerful computer chips so small that they could not be seen by the naked eye.

But the melting is merely an illusion, according to Ho and postdoctoral researcher Erich Mueller.

In a study to be published on the Web in the journal Physical Review A, they report that the BEC only appears to form stripes because the lattice pattern changes -- the vortices remain separate the entire time.

"The equations were so simple we developed them with pencil and paper -- no computer was needed," Ho said. “That means we are truly beginning to understand the Bose-Einstein condensate, and that's the first step to learning whether we can control its behavior."

The finding solves a mystery uncovered by one of the first creators of BEC, Eric Cornell of the University of Colorado at Boulder. In 1999, Cornell’s team and two other experimental groups were able to spin BEC so fast that they caused a lattice of evenly spaced vortices to form within the material.

In 2002, Ho suggested that scientists might be able to cause BEC to achieve a much-desired quantum state, called the Quantum Hall state, if they increased the density of the vortices by spinning the BEC even faster. Inspired by this suggestion, Cornell decided to increase the density by squeezing the BEC. He saw the material change periodically between an array of vortices and a set of stripes, as if the vortex lattice was melting and then returning to its coherent form again and again.

"We had to wonder, if the vortices just melt together, how could they return to an organized pattern? We realized something strange was happening," Ho said.

When he and Mueller derived analytical equations to model the behavior of the condensate when it's squeezed, to their surprise, they found that the results perfectly matched what Cornell saw.

But the vortices did not actually melt together, they just re-arranged themselves from a perfect lattice into a different and entirely unique flow pattern, Ho said. The behavior suggests that the density of the BEC is sensitive to even very small changes in the vortex array.

The significance of the new calculations, according to Ho, is that they show experimental scientists such as Cornell are on the right track in achieving the Quantum Hall state, even though a higher density of vortices is still needed to reach this goal.

"Any control you have over the material will help with processing quantum information," he said. "I'm optimistic that a lot of progress will happen in this area soon, and the dream of quantum computation may one day be realized."

"Quantum computing is a distant goal, but in the process of reaching that goal, there are all kinds of benefits," Ho said.

This work was supported by NASA and the National Science Foundation.