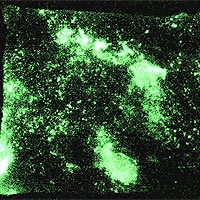 The phenomenon of mechanoluminescence was first discovered in 1605 by Sir Frances Bacon from scratching sugar with a knife. The top image is a photograph of the mechanoluminescence of N-acetylanthranilic acid crystals crushed between two transparent windows.

Many people know that if you bite or break a Wint-O-Green Lifesaver in the dark, you will see a spark of green light. That light is called mechanoluminescence, also known as triboluminescence.

This phenomenon was first discovered in 1605 by Sir Francis Bacon, who observed light emission when scraping a lump of sugar with a knife.

Typically, mechanoluminescence is generated by simply grinding, cleaving, biting, or scratching a material, and this process produces a very dim light.

As reported in the Nov. 9 issue of Nature, chemistry professor Kenneth S. Suslick and graduate student Nathan C. Eddingsaas at the University of Illinois at Urbana-Champaign have used high-intensity ultrasound in liquid slurries of sugar and other organic crystals to create mechanoluminescence up to 1,000 times more intense than from grinding.

The light is generated from a static electric discharge created when a crystal, such as sugar, is fractured. The mechanoluminescence is much the same as lightning during a thunderstorm.

Ultrasound in a liquid, just like any sound waves, causes oscillation of expansion and compression of the liquid. If the ultrasound is loud enough, the liquid can be pulled apart transiently forming millions of bubbles, each with a diameter smaller than a shaft of hair. These bubbles grow and contract with each sound wave and if conditions are just right, they can violently implode. These imploding bubbles form shock waves in the liquid, and Suslick previously has shown that these shock waves will drive suspended metal particles into one another at roughly half the speed of sound in the liquid.

At such high velocities, the malleable metal particles melted together. The metal particles were replaced with brittle organic crystals such as sugar in these studies. When these crystals collide with one another, they shatter into pieces, and that produces the mechanoluminescence as the fractured crystal surfaces pull apart and cause an electric discharge.

The ultrasonic waves occur 20,000 times a second, creating many high-speed collisions between solid particles, and that is why the glow is so much brighter than that produced by hand grinding.

This new route to producing mechanoluminescence will allow for more detailed studies, which may shed new light on this phenomenon.