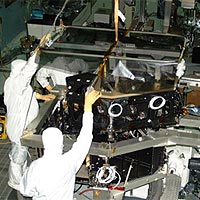 Shuttle astronauts will make one final house call to NASA's Hubble Space Telescope as part of a mission to extend and improve the observatory's capabilities through 2013.

'We have conducted a detailed analysis of the performance and procedures necessary to carry out a successful Hubble repair mission over the course of the last three shuttle missions. What we have learned has convinced us that we are able to conduct a safe and effective servicing mission to Hubble,' Griffin said. 'While there is an inherent risk in all spaceflight activities, the desire to preserve a truly international asset like the Hubble Space Telescope makes doing this mission the right course of action.'

The flight is tentatively targeted for launch during the spring to fall of 2008. Mission planners are working to determine the best location and vehicle in the manifest to support the needs of Hubble while minimizing impact to International Space Station assembly. The planners are investigating the best way to support a launch on need mission for the Hubble flight. The present option will keep Launch Pad 39-B at the Kennedy Space Center, Fla., available for such a rescue flight should it be necessary.

Altman, a native of Pekin, Ill., will be making his fourth spaceflight and his second trip to Hubble. He commanded the STS-109 Hubble servicing mission in 2002. He served as pilot of STS-90 in 1998 and STS-106 in 2000. Johnson, a Seattle native and former Navy test pilot and NASA research pilot, was selected as an astronaut in 1998. He will be making his first spaceflight.

Feustel, Good, and McArthur were each selected as astronauts in 2000. Feustel, a native of Lake Orion, Mich., was an exploration geophysicist in the petroleum industry at the time of his selection by NASA. Good is from Broadview Heights, Ohio, and is an Air Force colonel and weapons' systems officer. He graduated from the Air Force Test Pilot School, having logged more than 2,100 hours in 30 different types of aircraft. McArthur, born in Honolulu, considers California her home state. An oceanographer and former chief scientist at the Scripps Institution of Oceanography, she has a doctorate from the University of California-San Diego.

The two new instruments are the Cosmic Origins Spectrograph (COS) and Wide Field Camera 3 (WFC3). The COS is the most sensitive ultraviolet spectrograph ever flown on Hubble. The instrument will probe the cosmic web, the large-scale structure of the universe whose form is determined by the gravity of dark matter and is traced by the spatial distribution of galaxies and intergalactic gas.

WFC3 is a new camera sensitive across a wide range of wavelengths (colors), including infrared, visible, and ultraviolet light. It will have a broad inquiry from the planets in our solar system to the early and distant galaxies beyond Hubble's current reach, to nearby galaxies with stories to tell about their star formation histories.

Other planned work includes installing a refurbished Fine Guidance Sensor that replaces one degrading unit of the three already onboard. The sensors control the telescope's pointing system. An attempt will also be made to repair the Space Telescope Imaging Spectrograph. Installed in 1997, it stopped working in 2004. The instrument is used for high resolution studies in visible and ultraviolet light of both nearby star systems and distant galaxies, providing information about the motions and chemical makeup of stars, planetary atmospheres, and other galaxies.

'Hubble has been rewriting astronomy text books for more than 15 years, and all of us are looking forward to the new chapters that will be added with future discoveries and insights about our universe,' said Mary Cleave, NASA's associate administrator for the Science Mission Directorate.

The Hubble servicing mission is an 11-day flight. Following launch, the shuttle will rendezvous with the telescope on the third day of the flight. Using the shuttle's mechanical arm, the telescope will be placed on a work platform in the cargo bay. Five separate space walks will be needed to accomplish all of the mission objectives.

'The Hubble mission will be an exciting mission for the shuttle team. The teams have used the experiences gained from Return to Flight and station assembly to craft a very workable Hubble servicing flight. The inspection and repair techniques, along with spacewalk planning from station assembly, were invaluable in showing this mission is feasible,' said Associate Administrator for Space Operations Bill Gerstenmaier. 'There are plenty of challenges ahead as the teams do the detailed planning and figure the best way to provide for a launch on need capability for the mission. There is no question that this highly motivated and dedicated flight control team will meet the challenge.'

The Hubble Space Telescope is an international cooperative project between NASA and the European Space Agency.