Hottest body outside the sun: Io 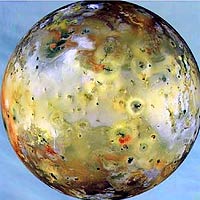 Io, Io, it's the hottest place to go. The satellite of Jupiter is the most volcanically active body, too. How hot is it? WUSTL planetary scientists have shown that Io is so hot its lavas are vaporizing sodium, potassium, silicon and iron gases into its atmosphere.

The hottest spot in the solar system is neither Mercury, Venus, nor St. Louis in the summer. Io, one of the four satellites that the Italian astronomer Galileo discovered orbiting Jupiter almost 400 years ago, takes that prize. The Voyager spacecraft discovered volcanic activity on Io over 20 years ago and subsequent observations show that Io is the most volcanically active body in the solar system. The Galileo spacecraft, named in honor of the astronomer Galileo, found volcanic hot spots with temperatures as high as 2,910 Fahrenheit (1,610 Celsius).

Now computer models of volcanic eruptions on Io performed by researchers at Washington University in St. Louis show that the lavas are so hot that they are vaporizing sodium, potassium, silicon and iron and probably other gases as well into its atmosphere.

Using an updated version of MAGMA, a versatile computer program he developed 15 years ago with a Harvard University colleague, Bruce Fegley, Jr., Ph.D., professor of earth and planetary sciences in Arts & Sciences at Washington University in St. Louis, found that some of these elements are vaporized at least partly as single-atom gases. Others are vaporized in different molecular forms, for instance, silicon monoxide, silicon dioxide and iron monoxide.

"Reaction of these gases with sulfur and chlorine species in volcanic gases could lead to the formation of such unusual gases as sodium chloride, potassium chloride, magnesium dichloride and iron dichloride, " Fegley said.

Now Fegley has found that sodium and potassium in Ionian volcanic gases are being vaporized from the hot lavas. Fegley and research assistant Laura Schaefer of Washington University used data from the Galileo mission and Earth-based observations from high-powered telescopes in their NASA-funded research. They published their results in the May 2004 issue of Icarus, the leading planetary science journal.

"We're basically doing geology on Io using data from telescopes on Earth, which shows that observations like this can compete with expensive space missions," said Fegley. "It's amazing how hot and how volcanically active Io is. It is 30 times more active than Earth. It's the hottest body outside of the sun in the solar system."

The innermost of the four major satellites of Jupiter - there are at least 16 - Io gets its high rate of volcanism from tidal interactions with Jupiter, which has the strongest magnetic field of all the planets. Over 100 active volcanoes have been identified on Io. Hotspots there have temperatures as high as 1,600 degrees Celsius. This is several hundred degrees hotter than terrestrial volcanoes like Kilauea in Hawaii, which has a temperature of about 1,000 Celsius (1,830 Fahrenheit).

Fegley and Schaefer found that silicon monoxide is the major silicon-bearing gas over the lavas.

"The interesting thing about this is that astronomers have observed silicon monoxide in other environments in interstellar space, most notably in the atmospheres of cool stars," said Fegley.

Astronomical observations of actively erupting volcanoes on Io may be able to detect the silicon monoxide gas in its atmosphere.

Fegley and Schaefer recommend an Io volcanic probe mission to directly measure the pressure, temperature and composition of gases of Pele, one of Io's most active volcanoes. Such an endeavor is "feasible using present technology," Fegley said. "It would vastly expand our knowledge of the most volcanically active body in the solar system."

The volcanic probe mission would represent an advance in the effort to unveil some of Io's mysteries, such as how the satellite, about the size of our own Moon, can maintain its high magma temperatures without being nearly totally molten, and how does Io maintain a strong enough lithosphere to support mountains higher than Mount Everest?