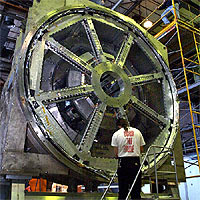 Workers install the 100,000 pound magnet for testing at the University of Illinois prior to the G-Zero experiment at Thomas Jefferson National Accelerator Facility in Newport News, Va.

An international team of nuclear physicists has determined that particles called strange quarks do, indeed, contribute to the ordinary properties of the proton.

Quarks are subatomic particles that form the building blocks of atoms. How quarks assemble into protons and neutrons, and what holds them together, is not clearly understood. New experimental results are providing part of the answer.

The experiment, called G-Zero, was performed at Thomas Jefferson National Accelerator Facility in Newport News, Va. Designed to probe proton structure, specifically the contribution of strange quarks, the experiment has involved an international group of 108 scientists from 19 institutions. Steve Williamson, a physicist at the University of Illinois at Urbana-Champaign, is the experiment coordinator.

“The G-Zero experiment provided a much broader view of the small-scale structure of the proton,” said Doug Beck, a physicist at Illinois and spokesman for the experiment. “While our results agree with hints from previous experiments, the new findings are significantly more extensive and provide a much clearer picture.”

Beck will present the experimental results at a seminar at the Jefferson facility Friday morning. Also on Friday, the researchers will submit a paper describing the results to the journal Physical Review Letters. The paper will be posted on the physics archive (under “nuclear experiment”).

The centerpiece of the G-Zero experiment is a doughnut-shaped superconducting magnet 14 feet in diameter that was designed and tested by physicists at Illinois including Ron Laszewski, now retired. The 100,000-pound magnet took three years to build.

In the experiment, an intense beam of polarized electrons was scattered off liquid hydrogen targets located in the magnet’s core. Detectors, mounted around the perimeter of the magnet, recorded the number and position of the scattered particles. The researchers then used mathematical models to retrace the particles’ paths to determine their momenta.

“There is a lot of energy inside a proton,” Beck said. “Some of that energy can change back and forth into particles called strange quarks.” Unlike the three quarks (two “up” and one “down”) that are always present in a proton, strange quarks can pop in and out of existence.

“Because of the equivalence of mass and energy, the energy fields in the proton can sometimes manifest themselves as these ‘part-time’ quarks,” Beck said. “This is the first time we observed strange quarks in this context, and it is the first time we measured how often this energy manifested itself as particles under normal circumstances.”

“The G-Zero experiment tells us more about the strong interaction – how protons and neutrons are held together,” Beck said. “However, we still have much to learn.”

The G-Zero experimental program is funded by the National Science Foundation, the U.S. Department of Energy, the French National Center for Scientific Research (CNRS) and the Natural Sciences and Engineering Research Council (NSERC) in Canada.