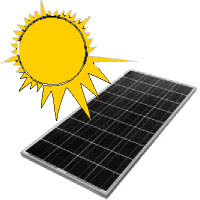 When photovoltaic material is exposed to intense light it forms defects, reducing the efficiency of the solar cells by 10 to 15 percent. New study at Ohio University may have found the root of the problem.

Commercial products such as laptop computer monitors and solar-powered calculators are constructed from a light-sensitive material with a peculiar problem: When exposed to intense light, it forms defects, reducing the efficiency of the solar cells by 10 to 15 percent.

Scientists have been pondering this flaw since the 1970s, because the material - hydrogenated amorphous silicon, or a-Si:H - has important applications for solar energy generation. A new study reported in the June 13 issue of the journal Applied Physics Letters, however, suggests that Ohio University scientists may have found the root of the problem.

When this photovoltaic material is exposed to intense light, hydrogen atoms move into new arrangements in which some silicon atoms become bonded to two silicon and two hydrogen atoms, creating a structure called silicon dihydride, or SiH2, said David Drabold, Presidential Research Scholar and professor of physics and astronomy at Ohio University, who co-authored the paper with graduate student Tesfaye Abtew and P. C. Taylor, Distinguished Professor of Physics at the University of Utah.

It’s a process analogous to what happens when light hits photographic film, Drabold explained. Light prompts small clusters of silver atoms to accumulate at the surface and form an image. In the case of the photovoltaic material, however, light makes hydrogen atoms move, which creates undesirable defects.

Drabold and Abtew came to the conclusion after running quantum mechanical computer simulations of how the atoms in the material respond to light. The work is based jointly on the simulations and on experimental findings by Taylor and his group.

’This isn’t a fatal effect, but it does reduce performance. It would be nice if the problem could be ameliorated some,’ said Drabold, who is funded by the National Science Foundation.

The scientists currently are devising further models to explain how hydrogen motion and creation of SiH2 wreak havoc on the solar cells, and are beginning to understand its pathways, he added.

Though a-SiH isn’t the only photovoltaic material of interest to the solar power industry, figuring out to address the flaw could lead to improvements in this important class of solar cells, Drabold said.

’If you can figure out what is going on, at least you have some reasonable guidance for how to solve it, such as adding some impurity to block it,’ he said.

Though popularly used in consumer products such as flat-screen computer monitor displays and calculators, a-Si:H materials also have potential for large-scale energy production. They are almost as efficient as conventional electric generation, especially in sunny areas, and they don’t generate greenhouse gases, he noted.