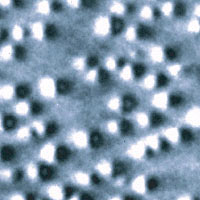 Micrograph of pyramid-shaped quantum dots grown from indium, gallium, and arsenic. Each dot is about 20 nanometers wide and 8 nanometers in height.

A light bulb isn’t very useful without a reliable on/off switch. The same holds true for quantum dots. These ultra tiny electronic nanostructures someday may serve as the ones and zeros used by a superfast quantum computer, but first physicists need to refine their ability to turn quantum dots "on" and "off."

In the June 23 on-line issue of Applied Physics Letters, researchers from the National Institute of Standards and Technology (NIST) and the National Renewable Energy Laboratory (NREL) take a step in the right direction. They report a way to measure accurately the amount of laser light needed to shift the electrons in a particular type of quantum dot between two discrete states, a low energy, ground state and a higher energy, excited state.

The strength of the interaction between quantum dots and electromagnetic waves like laser light is affectionately known in physical science circles as the "dipole moment." Loosely translated, it’s a number that tells you how easy the dots are to excite. The new NIST/NREL technique measures the dipole moment directly by enclosing the dots in a cavity where a pulse of laser light can pass over them repeatedly. With each successive pass, the laser light gets a little dimmer as the dots absorb some of the energy. Averaging the changes in energy over many pulses gives an accurate measurement of the dipole moment.

The ability to measure accurately the dipole moment for quantum dots made of different materials should help nanotechnology researchers optimize these structures for a variety of applications, including both quantum computing and quantum communications.