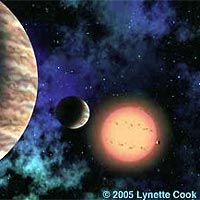 Three planets orbit the star Gliese 876 in this artist’s rendering. The smallest of the trio, barely visible to the right of the small red star, is the most Earth-like extrasolar planet yet discovered. (Image © Lynette Cook)

The world's preeminent planet hunters have discovered the most Earth-like extrasolar planet yet: a possibly rocky world about 7.5 times as massive as the Earth.

This hot 'super-Earth,' just 15 light years away, travels in a nearly circular orbit only 2 million miles from its parent star, Gliese 876, and has a radius about twice that of Earth.

All the nearly 150 extrasolar planets discovered to date that are orbiting normal stars have been larger than Uranus, an ice giant about 15 times the mass of Earth.

'This is the smallest extrasolar planet yet detected and the first of a new class of rocky terrestrial planets,' said team member Paul Butler of the Carnegie Institution in Washington. 'It's like Earth's bigger cousin.'

'This planet answers an ancient question,' said team leader Geoffrey Marcy, professor of astronomy at the University of California, Berkeley. 'Over 2,000 years ago, the Greek philosophers Aristotle and Epicurus argued about whether there were other Earth-like planets. Now, for the first time, we have evidence for a rocky planet around a normal star.'

Part of a system that includes two other Jupiter-size planets, the new rocky planet whips around its star in a mere two days, and is so close to the star's surface that the astronomers say its temperature probably tops 200 to 400 degrees Celsius (400 to 750 degrees Fahrenheit) - oven temperatures far too hot for life as we know it.

Nevertheless, the ability to detect the tiny wobble that the planet induces in the star gives them confidence that they will be able to discover even smaller rocky planets in orbits more hospitable to life.

The team measures a minimum mass of 5.9 Earth masses for the new planet, which is orbiting Gliese 876 with a period of 1.94 days at a distance of 0.021 astronomical units (AU), or 2 million miles.

Though the team has no proof that the planet is rocky, its low mass precludes it from retaining gas like Jupiter. Three other purportedly rocky extrasolar planets have been reported, but they orbit a pulsar, the flashing corpse of an exploded star.

Gliese 876 (or GJ 876) is a small, red star known as an M dwarf - the most common type of star in the galaxy. It is located in the constellation Aquarius, and, at about one-third the mass of the sun, is the smallest star around which planets have been discovered. Butler and Marcy detected the first planet in 1998, and it proved to be a gas giant about twice the mass of Jupiter. Then, in 2001, they reported a second planet, another gas giant about half the mass of Jupiter. The two are in resonant orbits, the outer planet taking 60 days to orbit the star, twice the period of the inner giant planet.

Data on the Gliese 876 system, gathered from research the astronomers conducted at the Keck Observatory in Hawaii, were analyzed by Lissauer and Rivera in order to model the unusual motions of the two known planets. Three years ago, they got an inkling that there might be a smaller, third planet orbiting the star. In fact, if they hadn't taken account of the resonant interaction between the two known planets, they never would have seen the third.

'We had a model for the two planets interacting with one another, but when we looked at the difference between the two-planet model and the actual data, we found a signature that could be interpreted as a third planet,' Lissauer said.

A three-planet model consistently gave a better fit to the data, added Rivera. 'But because the signal from this third planet was not very strong, we were very cautious about announcing a new planet until we had more data,' he said.

'It is the higher precision data from the upgraded HIRES that gives us confidence in this result,' Butler said.

The team now has convincing data for the planet orbiting very close to the star, at a distance of about 10 stellar radii. That's less than one-tenth the size of Mercury's orbit in our solar system.

'In a two-day orbit, it's about 200 degrees Celsius too hot for liquid water,' Butler said. 'That tends to lead us to the conclusion that the most probable composition of this thing is like the inner planets of this solar system - a nickel/iron rock, a rocky planet, a terrestrial planet.'

'The planet's mass could easily hold onto an atmosphere,' noted Laughlin, an assistant professor of astronomy at UC Santa Cruz. 'It would still be considered a rocky planet, probably with an iron core and a silicon mantle. It could even have a dense steamy water layer. I think what we are seeing here is something that's intermediate between a true terrestrial planet like the Earth and a hot version of the ice giants Uranus and Neptune.'

A paper detailing the team's results has been submitted to The Astrophysical Journal. Coauthors on the paper are Steven Vogt and Gregory Laughlin of the Lick Observatory at the University of California, Santa Cruz; Debra Fischer of San Francisco State University; and Timothy M. Brown of NSF's National Center for Atmospheric Research in Boulder, Colo.

Combined with improved computer software, the new CCD detectors designed by this team for Keck's HIRES spectrometer can now measure the Doppler velocity of a star to within one meter per second - human walking speed - instead of the previous precision of 3 meters per second. This improved sensitivity will allow the planet-hunting team to detect the gravitational effect of an Earth-like planet within the habitable zone of M dwarf stars like Gliese 876.

'We are pushing a whole new regime at Keck to achieve one meter per second precision, triple our old precision, that should also allow us to see Earth-mass planets around sun-like stars within the next few years,' Butler said.

'Our UC Santa Cruz and Lick Observatory team has done an enormous amount of optical and technical and detector work to make the Keck telescope a rocky planet hunter, the best one in the world,' Marcy added.

Lissauer also is excited by another feat reported in the paper submitted to The Astrophysical Journal. For the first time, he, Rivera and Laughlin have determined the line-of-sight inclination of the orbit of the stellar system solely from the observed Doppler wobble of the star. Using dynamical models of how the two Jupiter-size planets interact, they were able to calculate the masses of the two giant planets from the observed shapes and precession rates of their oval orbits. Precession is the slow turning of the long axis of a planet's elliptical orbit.

They showed that the orbital plane is tilted 40 degrees to our line of sight. This allowed the team to estimate the most likely mass of the third planet as 7.5 Earth masses.

'There's more dynamical modeling involved in this study than any previous study, much more,'
Lissauer said.

The team plans to continue to observe the star Gliese 876, but is eager to find other terrestrial planets among the 150 or more M dwarf planets they observe regularly with Keck.

'So far, we find almost no Jupiter mass planets among the M dwarf stars we've been observing, which suggests that, instead, there is going to be a large population of smaller mass planets,' Butler noted.

The astronomers' research was supported by NSF, the National Aeronautics and Space Administration, the University of California and the Carnegie Institution of Washington.