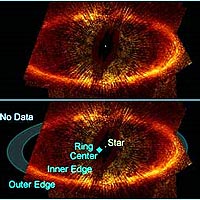 The top view, taken by NASA’s Hubble Space Telescope is the most detailed visible-light image ever taken of a narrow, dusty ring around the nearby star Fomalhaut (HD 216956). The image offers the strongest evidence yet that an unruly and unseen planet may be gravitationally tugging on the ring. Part of the ring [at left] is outside the telescope’s view. Hubble unequivocally shows that the center of the ring is a whopping 1.4 billion miles (15 astronomical units) away from the star. This is a distance equal to nearly halfway across our solar system. The geometrically striking ring, tilted obliquely toward Earth, would not have such a great offset if it were simply being influenced by Fomalhaut’s gravity alone.

The view at bottom points out important features in the image, such as the ring’s inner and outer edges. Astronomers used the Advanced Camera for Surveys’ (ACS) coronagraph aboard Hubble to block out the light from the bright star so they could see the faint ring. The dot near the ring’s center marks the star’s location. Despite the coronagraph, some light from the star is still visible in this image, as can be seen in the wagon wheel-like spokes that form an inner ring around Fomalhaut [labeled ’scattered light ’noise’’].

NASA Hubble Space Telescope’s most detailed visible-light image ever taken of a narrow, dusty ring around the nearby star Fomalhaut (HD 216956), offers the strongest evidence yet that an unruly and unseen planet may be gravitationally tugging on the ring.

Hubble unequivocally shows that the center of the ring is a whopping 1.4 billion miles (15 astronomical units) away from the star. This is a distance equal to nearly halfway across our solar system. The most plausible explanation, astronomers said, is that an unseen planet moving in an elliptical orbit is reshaping the ring with its gravitational pull. The geometrically striking ring, tilted obliquely toward Earth, would not have such a great offset if it were simply being influenced by Fomalhaut’s gravity alone.

An offset of the ring center from the star has been inferred from previous and longer wavelength observations using submillimeter telescopes on Mauna Kea, Hawaii, the Spitzer Space Telescope, Caltech’s Submillimeter Observatory and applying theoretical modeling and physical assumptions. Now Hubble’s sharp images directly reveal the ring’s offset from Fomalhaut.

These new observations provide strong evidence that at least one unseen planetary mass object is orbiting the star. Hubble would have detected an object larger than a planet, such as a brown dwarf. ’Our new Hubble images confirm those earlier hypotheses that proposed a planet was perturbing the ring,’ said Paul Kalas of the University of California at Berkeley. The ring is similar to our solar system’s Kuiper Belt, a vast reservoir of icy material left over from the formation of our solar system planets.

The observations offer insights into our solar system’s formative years, when the planets played a game of demolition derby with the debris left over from the formation of our planets, gravitationally scattering many objects across space. Some icy material may have collided with the inner solar system planets, irrigating them with water formed in the colder outer solar system. Other debris may have traveled outward, forming the Kuiper Belt and the Oort Cloud, a spherical cloud of material surrounding the solar system.

Only Hubble has the exquisite optical resolution to resolve that the ring’s inner edge is sharper than its outer edge, a telltale sign that an object is gravitationally sweeping out material like a plow clearing away snow. Another classic signature of a planet’s influence is the ring’s relatively narrow width, about 2.3 billion miles (25 astronomical units). Without an object to gravitationally keep the ring material intact, astronomers said, the particles would spread out much wider.

’What we see in this ring is similar to what is seen in the Cassini spacecraft images of Saturn’s narrow rings. In those images, Saturn’s moons are ’shepherding’ the ring material and keeping the ring from spreading out,’ Kalas said.

The suspected planet may be orbiting far away from Fomalhaut, inside the dust ring’s inner edge, between 4.7 billion and 6.5 billion miles (50 to 70 astronomical units) from the star. The ring is 12 billion miles (133 astronomical units) from Fomalhaut, which is much farther away than our outermost planet Pluto is from the Sun. These Hubble observations do not detect the putative planet directly, so the astronomers cannot measure its mass. They will, instead, conduct computer simulations of the ring’s dynamics to estimate the planet’s mass.

Kalas and collaborators James R. Graham of the University of California at Berkeley and Mark Clampin of the NASA Goddard Space Flight Center in Greenbelt, Md., will publish their findings in the June 23, 2005 issue of the journal Nature.

Fomalhaut, a 200-million-year-old star, is a mere infant compared to our own 4.5-billion-year-old Sun. It resides 25 light-years away from the Sun. Located in the constellation Piscis Austrinus (the Southern Fish), the Fomalhaut ring is ten times as old as debris disks seen previously around the stars AU Microscopii and Beta Pictoris, where planets may still be forming. If our solar system is any example, planets should have formed around Fomalhaut within tens of millions of years after the birth of the star.

The Hubble images also provide a glimpse of the outer planetary region surrounding a star other than our Sun. Many of the more than 100 planets detected beyond our solar system are orbiting close to their stars. Most of the current planet-detecting techniques favor finding planets that are close to their stars.

’The size of Fomalhaut’s dust ring suggests that not all planetary systems form and evolve in the same way — planetary architectures can be quite different from star to star,’ Kalas explained. ’While Fomalhaut’s ring is analogous to the Kuiper Belt, its diameter is four times greater than that of the Kuiper Belt.’

The astronomers used the Advanced Camera for Surveys’ (ACS) coronagraph aboard Hubble to block out the light from the bright star so they could see details in the faint ring.

’The ACS’s coronagraph offers high contrast, allowing us to see the ring’s structure against the extremely bright glare from Fomalhaut,’ Clampin said. ’This observation is currently impossible to do at visible wavelengths without the Hubble Space Telescope. The fact that we were able to detect it with Hubble was unexpected, but impressive.’

Kalas and his collaborators used Hubble over a five-month period in 2004 — May 17, Aug. 2, and Oct. 27 — to map the ring’s structure. One side of the ring has yet to be imaged because it extended beyond the ACS camera’s field of view. The astronomers will use Hubble again this summer to map the entire ring. They expect that the additional Hubble data will reveal whether or not the ring has any gaps, which could have been carved out by the gravitational influence of an unseen body. The longer, deeper exposures also may show whether the ring has an even wider diameter than currently seen. In addition, the astronomers will measure the ring’s colors to determine its physical properties, including its composition.

Previous thermal emission maps of Fomalhaut showed that one side of the ring is warmer than the other side, implying that the ring is off center by about half the distance measured by Hubble. This difference might be explained by the fact that Hubble’s ACS images of the ring’s structure are 100 times sharper than the longer wavelength observations, and hence, yield a much more accurate result. Or the discrepancy might imply that the ring’s size looks different at other wavelengths.

Fomalhaut’s dust ring was discovered in 1983 in observations made by NASA’s Infrared Astronomical Satellite (IRAS). The system is a compelling target for future telescopes such as the James Webb Space Telescope and the Terrestrial Planet Finder, Kalas said.