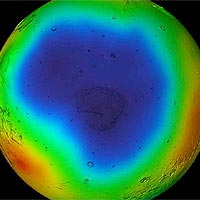 Odyssey image of Mars. Blue colors show the water ice that is revealed during the martian summer.

NASA's Mars Odyssey spacecraft is revealing new details about the intriguing, dynamic character of the frozen layers now known to dominate the high northern latitudes of Mars. The implications have a bearing on science strategies for future missions in the search of habitats.

Odyssey's neutron and gamma ray sensors tracked seasonal changes as layers of "dry ice" (carbon-dioxide frost or snow) accumulated during northern Mars' winter and then dissipated in the spring, exposing a soil layer rich in water ice, the martian counterpart to permafrost. Researchers used measurements of martian neutrons, combined with height measurements from the laser altimeter on another NASA spacecraft, Mars Global Surveyor, to monitor the amount of dry ice during the northern winter and spring seasons.

"Once the carbon-dioxide layer disappears, we see even more water ice in northern latitudes than Odyssey found last year in southern latitudes," said Odyssey's Dr. Igor Mitrofanov of the Russian Space Research Institute, Moscow, lead author of a paper in the June 27 issue of the journal Science. "In some places, the water-ice content is more than 90 percent by volume." Mitrofanov and co-authors used the changing nature of the relief of these regions, measured more than two years ago by the Global Surveyor's laser altimeter science team, to explore the implications of the changes.

Mars Odyssey's trio of instruments, the gamma ray spectrometer suite, can identify elements in the top meter (three feet) or so of Mars' surface. Mars Global Surveyor's laser altimeter is precise enough to monitor meter-scale changes in the thickness of the seasonal frost, which can accumulate to depths greater than a meter. The new findings show a correlation in the springtime between Odyssey's detection of dissipating carbon dioxide in latitudes poleward of 65 degrees north and Global Surveyor's measurement of the thinning of the frost layer in prior years.

"Odyssey's high-energy neutron detector allows us to measure the thickness of carbon- dioxide at lower latitudes, where Global Surveyor's altimeter does not have enough sensitivity," Mitrofanov said. "On the other hand, the neutron detector loses sensitivity to measure carbon-dioxide thickness greater than one meter (3 feet), where the altimeter obtained reliable data. Working together, we can examine the whole range of dry ice snow accumulations."

"The synergy between the measurements from our two 'eyes in the skies of Mars' has enabled these new findings about the nature of near-surface frozen materials, and suggests compelling places to visit in future missions in order to understand habitats on Mars," said Dr. Jim Garvin, NASA's Lead Scientist for Mars Exploration.

Another report, to be published in the Journal of Geophysical Research-Planets, combines measurements from Odyssey and Global Surveyor to provide indications of how densely the winter layer of carbon-dioxide frost or snow is packed at northern latitudes greater than 85 degrees. The Odyssey data are used to estimate the mass of the deposit, which can then be compared with the thickness to obtain a density. The dry ice layer appears to have a fluffy texture, like freshly fallen snow, according to the report by Dr. William Feldman of Los Alamos National Laboratory, N.M., and 11 co-authors. The study also found once the dry ice disappears, the remaining surface near the pole is composed almost entirely of water ice.

"Mars is constantly changing," said Dr. Jeffrey Plaut, Mars Odyssey project scientist at the Jet Propulsion Laboratory, Pasadena, Calif. "With Mars Odyssey, we plan to examine these dynamics through additional seasons, to watch how the winter accumulations of carbon dioxide on each pole interact with the atmosphere in the current climate regime."