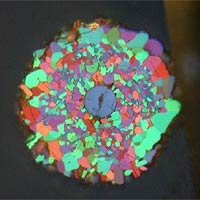 The image is a cross section of a 5 percent carbon-doped wire taken with polarized light. The picture shows all of the small, ~10-micron-sized grains lit up in wonderful colors. (Photo courtesy of the U.S. Dept. of Energy's Ames Laboratory)

At the U. S. Department of Energy’s Ames Laboratory, a basic research effort to enhance the properties of magnesium diboride, MgB2, superconductors by doping them with carbon atoms has doubled the magnetic field the material can withstand. The work may one day ease the expense associated with current superconducting materials that generate the intense magnetic fields required for such applications as magnetic resonance imaging for medical diagnostics, high-field magnets for research, and superconducting magnets for particle accelerators. The Basic Energy Sciences Office of the DOE’s Office of Science supports the fundamental research on MgB2 as part of an experimental effort on superconductivity and correlated systems at Ames Laboratory.

Unlike ordinary conductors, such as copper, superconductors conduct electricity perfectly, without energy loss due to heat. But metallic superconductors (Most notable among them is triniobium-tin, Nb3Sn.) have always been hampered by the fact that they must be cooled to an extremely low temperature before they become superconducting. That critical temperature, or Tc, rests near absolute zero (minus 459 degrees Fahrenheit), thus cooling has always been expensive, requiring large quantities of liquid helium.

However, things warmed up in 2001 when scientists discovered the superconducting properties of magnesium diboride. They were amazed to see that the critical temperature at which MgB2 becomes superconducting is 39 Kelvin (minus 389 F), far warmer than the reigning niobium-tin superconductors, which become superconducting at 18 K (minus 427 F). The higher Tc of MgB2 also makes cooling the material more economical as it allows for the use of less expensive refrigerators in place of liquid helium.

Magnesium diboride’s unexpected superconducting capabilities brought speculation about the material’s potential for replacing niobium-tin superconductors in various applications and thus reducing the expense of those technologies. But for that speculation to become a reality, more basic research was needed to increase both the magnetic field MgB2 can withstand and the electric current it can carry. This research has now been carried out by Ames Laboratory physicists Paul Canfield, Sergey Bud’ko and Doug Finnemore, and graduate assistant Derek Wilke.

Canfield, who is also an Iowa State University physics professor, and his group were the first to describe the mechanism of superconductivity in MgB2. They devised a method of turning boron of a given form into MgB2 with a similar form by allowing magnesium vapor to diffuse into the boron matrix. This patented technique has been used to make pellets, wire segments and thin films. Their familiarity with MgB2 serves the researchers well in current efforts to enhance its superconducting properties.

"In this game, once you get an idea of what the pure material is doing, you want to perturb it," Canfield said. "You want to mess with it and see how it responds. The problem is that it’s very hard to systematically perturb MgB2. It really wants to form in a fundamentally pure fashion."

As it turns out, "messing" with the material is one of the things Canfield and his group do best. They were able to figure out how to get carbon into MgB2. Experiments done by Wilke showed that a 5 percent substitution of boron with carbon more than doubles the magnetic field MgB2 can withstand and still remain superconducting, raising it from 16 Tesla for the pure material to 36 Tesla with the 5 percent carbon-doping. Even though the carbon-doping of MgB2 lowers its critical temperature to 35 K (minus 397 F), 4 K less than in the pure material, the magnetic field as a function of temperature exceeds any of the NbSn compounds, which "peak out at around 30 Tesla," according to Canfield.

"That sounds promising, but there are two things still out there that need to be resolved," he cautioned. "One is determining how much current you can pass through the material and still have it remain superconducting," Canfield continued. "That’s the critical current, and it’s still inferior to triniobium-tin."

Increasing the critical current that MgB2 can withstand and still remain superconducting is a challenge because whenever an electric current passes through a superconductor, tiny whirlpools of electrons, called electron vortices, are created. The motion of electron vortices saps energy and destroys a material’s ability to superconduct. Finnemore’s specialty is pinpointing the locations of electron vortices, and knowing their locations makes it possible to "pin" them. If electrical and magnetic conditions are right, vortices will stick, or pin, themselves to nanometer-size precipitates in a superconductor. Once pinned to these impurities, they no longer move or dissipate energy. The trick is to find just the right impurity that will trap the vortices yet still allow the electricity to flow through the material.

"Titanium diboride is our first try as a precipitate, and it works without sucking out the carbon we added to increase the magnetic field," said Finnemore. He and Wilke added the TiB2 using chemical vapor deposition, which disperses the element uniformly throughout the material. "We think it’s just a better way to make samples than mixing powders," Finnemore added. "Over the next few years, we hope to try other precipitates using chemical vapor deposition."

Although Canfield is pleased with his group’s success in enhancing the superconducting properties of MgB2, he’s cautious about predicting too much too soon in terms of the material replacing Nb3Sn. He reminds us that there’s still that "second thing" out there that needs to be resolved. "Even if we can tweak the critical current to be better or comparable to niobium 3-tin, there’s still the metallurgy of determining how to get a sheath around this material and make it a useful wire rather than just a lab sample," he said. "That’s just beyond anything we do as basic physicists; it will have to happen on some engineering time scale. But as far as temperature and critical field go, it’s now looking better than triniobium-tin on both of those parameters. The critical current needs to be comparable or better. I think that really is the trinity of what you care about."