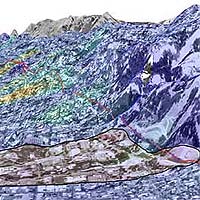 In what is perhaps the most detailed study yet of the active landslides in the East Bay hills, researchers found that the slides were moving downhill between 5 to 38 millimeters per year. Their findings, reported in the June 25 issue of the journal Science, demonstrate the power of a satellite mapping technique that provides far more information than what was previously possible through labor-intensive field studies.

Using high-resolution interferometric synthetic aperture radar, the scientists analyzed data collected between 1992 and 2001 by two European Remote Sensing satellites. Not surprisingly, during the period of heavy rains brought on during the 1997-1998 El Niño years, when seasonal precipitation increased by 200 percent, the researchers found that sliding rates increased by as much as 30 percent.

"We believe the seasonal acceleration of these landslides may be strongly controlled by elevated water pressures in the ground subsurface," said George Hilley, a postdoctoral researcher at UC Berkeley's Department of Earth and Planetary Science and lead author of the study. "Once you go about understanding the physics of these slides and how they respond to changing conditions due to precipitation and groundwater flow, then you can actually start to develop strategies for mediating these types of structures."

Hilley worked with Roland Bürgmann, UC Berkeley associate professor of earth and planetary science at the Berkeley Seismological Laboratory, to study the effect of precipitation on the landslides. The researchers charted the time lag from the onset of heavy rains to the acceleration of the landslides, noting that most slide movement occurs during the latter part of the rainy season, when subsurface water pressures may be high.

"Those types of things have been thought about before, but to have this level of spatial and temporal detail really gives you a lot of power to help figure out exactly what's going on in terms of how water pressures and the weight of the overlying soil accelerate slide movement," said Hilley. "The spatial and temporal resolution we've been able to obtain in this study is unprecedented. Unlike the slides in the East Bay hills, which have been recognized previously, the methods we demonstrated in this study may eventually be used to identify unrecognized landslides in other urban areas."

Unlike standard optical images, radar interferometry uses radar waves that are reflected off the ground. In use for more than 10 years, traditional radar interferometry was used to detect slight shifts in distance between the satellite and the ground from which the signal was bounced back. The data are then processed to create very detailed images of ground movement too subtle to detect by conventional means.

But measurements from traditional radar interferometry can be thrown off by noise created from such common features as vegetation or moving cars. Study co-authors from Italy - Managing Director Alessandro Ferretti and Project Manager Fabrizio Novali at the company Tele-Rilevamento Europa, and Professor Fabio Rocca at the Politecnico di Milano - were able to resolve this limitation with significant improvements to the standard radar interferometry technique.

In this new technique, highly reflective objects such as buildings or rock outcrops are tracked through as many as 50 satellite images. By tracking only these reliable points, noise within the measurements can be greatly reduced, and in urban environments where there are many reflective surfaces, a high density of quality measurements can be attained.

The researchers identified 18,428 such points in an area of about 16 square kilometers, and compared their images with mapped landslides available from geotechnical engineering firms to confirm the data's accuracy.

"This refined technique, which has been patented by our Italian colleagues, allows you to obtain data points in otherwise heavily vegetated terrain, where standard radar interferometry doesn't work," said Bürgmann. "Also, the point-by-point data collection method allows us to create images with much finer resolution."

He pointed out that to obtain the same amount of detail and information from field measurements, geologists would need to go on site month after month. "They would have to sit there for hours and days and do it again and again for each one of these 18,000 points we obtained with the satellite data," he said. "That's just not feasible."

For that reason, Bürgmann notes, field studies tend to focus on documenting damage, checking for telltale signs of ground movement such as cracked asphalt or buckled curbs. "We have almost no information on how fast or how often sliding events happen," he said. "In contrast, the radar interferometry method we used would allow us to actually monitor these slide areas."

Researchers also say the refined satellite mapping technique could be used to monitor deformation of ground that is characteristically soft, such as in San Francisco's Marina District or Treasure Island.