Red Dust in Planet-Forming Disk May Harbor Precursors to Life 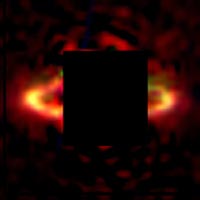 Red and near infrared wavelengths from the dust disk surrounding the star HR 4796A (masked in false-color image to make fainter disk visible) suggest the presence of complex organic molecules. The inner hole of the ring-shaped disk is big enough to fit our entire solar system and may have been swept clean of dust by orbiting planets. (Image: John Debes)

Astronomers at the Carnegie Institution have found the first indications of highly complex organic molecules in the disk of red dust surrounding a distant star. The eight-million-year-old star, known as HR 4796A, is inferred to be in the late stages of planet formation, suggesting that the basic building blocks of life may be common in planetary systems.

In a study published in the current Astrophysical Journal Letters, John Debes and Alycia Weinberger of the Carnegie Institution’s Department of Terrestrial Magnetism with Glenn Schneider of the University of Arizona report observations of infrared light from HR 4796A using the Near-Infrared Multi-Object Spectrometer aboard the Hubble Space Telescope. The researchers found that the spectrum of visible and infrared light scattered by the star’s dust disk looks very red, the color produced by large organic carbon molecules called tholins. The spectrum does not match those of other red substances, such as iron oxide.

Tholins do not form naturally on present-day Earth because oxygen in the atmosphere would quickly destroy them, but they are hypothesized to have existed on the primitive Earth billions of years ago and may have been precursors to the biomolecules that make up living organisms. Tholins have been detected elsewhere in the solar system, such as in comets and on Saturn’s moon Titan, where they give the atmosphere a red tinge. This study is the first report of tholins outside the solar system.

“Until recently it’s been hard to know what makes up the dust in a disk from scattered light, so to find tholins this way represents a great leap in our understanding,” says Debes.

HR 4796A is located in the constellation Centaurus, visible primarily form the southern hemisphere. It is about 220 light years from Earth. The discovery of its dust disk in 1991generated excitement among astronomers, who consider it a prime example of a planetary system caught in the act of formation. The dust is generated by collisions of small bodies, perhaps similar to the comets or asteroids in our solar system, and which may be coated by the organics. These planetesimals can deliver these building blocks for life to any planets that may also be circling the star.

“Astronomers are just beginning to look for planets around stars much different from the Sun. HR 4796A is twice as massive, nearly twice as hot as the sun, and twenty times more luminous than the Sun,” says Debes. “Studying this system provides new clues to understanding the different conditions under which planets form and, perhaps, life can evolve.”

This research is based on observations with the NASA/ESA Hubble Space Telescope and was supported by NASA and the NASA Astrobiology Institute.