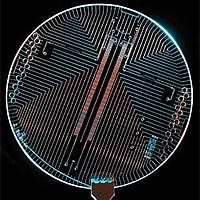 Lab on a chip

UC Berkeley researchers hope that a 'lab on a chip' like this will fly to Mars six years from now to look for signs of life. The chip is a microcapillary electrophoresis system that will be able to determine the composition and 'handedness' of amino acids, should any be found on the planet.

A joint UC San Diego/UC Berkeley experiment to detect life on Mars that is scheduled to fly aboard the European ExoMars rover mission in 2013 will receive $750,000 in development funding from the National Aeronautics and Space Administration (NASA), according to a NASA announcement this week.

The instrument is designed to provide the most rigorous analysis possible for the past and present existence of biological compounds on Mars' surface, according to Jeffrey Bada, a professor at UC San Diego's Scripps Institution of Oceanography and lead investigator on the project team. Other principal scientists are Richard Mathies, professor of chemistry at UC Berkeley, and Frank Grunthaner of NASA's Jet Propulsion Laboratory in Pasadena, as well as researchers at NASA's Ames Research Center in Menlo Park and the Leiden Institute of Chemistry in the Netherlands.

NASA is collaborating with the European Space Agency on the ExoMars mission, which will focus on exobiology and the science of life in space and on other planets. ExoMars will include a highly mobile rover with a drill capable of extracting soil samples two meters below the Mars surface.

The UC instrument is called the Urey Mars Organic and Oxidant Detector, named after the late Nobel Laureate and UC San Diego scholar Harold C. Urey. It will perform the first search for key classes of organic molecules in the Martian environment using state-of-the-art analytical methods at part-per-trillion sensitivities. The Viking landers in the 1970s unsuccessfully tested for organic molecules on Mars, but their sensitivity was so low that they would have failed to detect life even if there were a million bacteria per gram of soil.

'Urey will able to detect key molecules associated with life at a sensitivity roughly a million times greater than previous instrumentation,' said Bada, a professor of marine chemistry and director of the NASA Specialized Center of Research and Training in Exobiology at Scripps. 'It will be the first instrument to have the capacity to detect amino acids, along with other possible biomolecules, and determine their origin on another planet.'

A compact instrument that you can hold in your hand, Urey will search for trace levels of organic molecules, such as amino acids and some of the components of DNA and RNA, by heating and analyzing spoon-sized amounts of Martian soil. The molecules released from the heating are condensed on a trap cooled to Mars' nighttime temperature, and then probed with a laser.

If amino acids are detected, a device developed at UC Berkeley called the microfabricated capillary electrophoresis instrument examines the amino acid composition and chirality, or 'handedness,' of the molecules to determine whether they come from biological sources. Non-biological amino acids contain nearly equal amounts of left- and right-handed forms, while those from organic matter exhibit excessive amounts of one hand or the other. Amino acids on Earth use only left-handed amino acids.

'We feel that measuring homochirality – a prevalence of one type of handedness over another – would be absolute proof of life,' said Mathies, a UC Berkeley member of the California Institute for Quantitative Biomedical Research (QB3).

'So if we see a significant excess of right-handed amino acids, the only conclusion that's possible is: Eureka! We've detected unique Martian life that's not related to Earth life whatsoever,' Bada said.

Bada indicated that digging deep into the Martian soil is vital to the mission since ultraviolet and cosmic radiation have likely eliminated any potential indications of life on the planet's surface.

'Humans are incredibly intrigued about the possibility of life beyond Earth,' said Bada. 'We're at a moment in time when we are going to be addressing this issue in the most robust way that's ever been attempted. I think it is extraordinarily interesting that if we do detect life on Mars, it not only provides us with an opportunity to try and understand how life began on that planet, but also will help us understand how life began on our own planet.'

Development of the Urey instrument is managed by NASA's Jet Propulsion Laboratory, a division of the California Institute of Technology, Pasadena, for the NASA Science Mission Directorate, Washington.