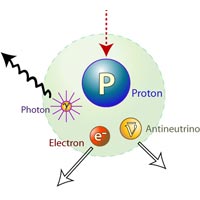 Typically, a neutron free of its atom will decay into three particles: a proton, an electron and an antineutrino. Rarely, a process called radiative neutron decay also occurs, resulting in the same three particles as well as additional photons of light.

Neutrons -- the tiny particles that match with protons to form the innards of nearly every atom in the universe -- decay when left to fend for themselves outside an atomic nucleus. For decades, researchers have predicted but never proved that roughly 1 in 1,000 of those decays will produce light in the form of an energetic photon.

Now, for the first time, researchers have caught the photons from that 'radiative decay' in action. Reporting in the Dec. 21, 2006, issue of Nature, a team of researchers from the United States and Britain show results that may confirm neutron radiative decay.

In addition to helping to prove a theory, the findings shed light on the intricacies of the so-called 'weak force,' which, along with gravity, the electromagnetic force and the strong force, form the four fundamental forces of nature.

'This is the first experiment to make a definitive detection of these rare photons,' said Fred Wietfeldt, assistant professor of physics at Tulane University. 'The next step is to make more precise measurements of their energy, direction and polarization. This opens the door to a new class of experiments to further elucidate the weak force and perhaps find hints of new physics.'

While within an atom's nucleus, neutrons and protons are bound together, and only under certain conditions do the neutrons decay. When removed from the atom, neutrons decay rapidly with a half-life of only 10 minutes, each breaking down to produce a proton, an electron and an antineutrino, and rarely, a photon.

With support from the National Science Foundation (NSF) and the National Institute of Standards and Technology (NIST), the physicists set up their experiment to interact with a beam of cold neutrons at the NIST Center for Neutron Research in Gaithersburg, Md.

To observed radiative decay photons, the researchers carefully measured when the various decay products arrived at a detector. If the decay occurs, according to theory, photons and electrons will arrive at the detector 20-millionths of a second ahead of the slower protons. Antineutrinos are too weak to be detected. The study revealed that three out of every 1,000 decays produce photons.

The neutron beam contains a large number of background photons, 'which makes the task of identifying the relatively rare radiative decay photons a true 'needle in the haystack' search,' added Wietfeldt.

'This result is a very significant achievement,' said Bradley D. Keister, program director for nuclear physics in NSF's mathematical and physical sciences directorate. 'Radiative neutron decay is an important process to measure because of its rather direct connection to the standard model, but has been difficult due to very high backgrounds.'

The research was conducted by physicists at Tulane University, University of Michigan and University of Maryland in collaboration with scientists at the National Institute of Standards and Technology Physics Laboratory and the University of Sussex in the United Kingdom.

News Story Origin and Copyright: NSF
Click here for the original news release.
'On the mountains of truth you can never climb in vain: either you will reach a point higher up today, or you will be training your powers so that you will be able to climb higher tomorrow.'