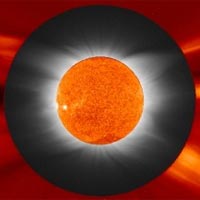 A composite of three images, this shows the March 29, 2006 solar eclipse.

The most true-to-life computer simulation ever made of our sun's multimillion-degree outer atmosphere, the corona, successfully predicted its actual appearance during the March 29, 2006, solar eclipse, scientists have announced.

The research, funded by NASA and the National Science Foundation (NSF), marks the beginning of a new era in space weather prediction.  The results are presented today at the American Astronomical Society (AAS)'s Solar Physics Division meeting in Durham, N.H.

The turbulent corona is threaded with magnetic fields generated beneath the visible solar surface. The evolution of these magnetic fields causes violent eruptions and solar storms originating in the corona.

Like a rubber band that's been twisted too tightly, solar magnetic fields suddenly snap to a new shape while blasting billions of tons of plasma into space, at millions of miles per hour, in what scientists call a coronal mass ejection (CME). Or the magnetic field explodes as a solar flare with the force of up to a billion 1-megaton nuclear bombs.

When directed at Earth, solar flares and CMEs can disrupt satellites, communications and power systems.

'Finding out that a hurricane is bearing down on you isn't much good if the warning only gives you an hour to prepare,' said Paul Bellaire, program director in NSF's Division of Atmospheric Sciences, which funded the research. 'That's the situation we're in now with space weather. Being able to determine the structure of the solar wind at its source -- the sun -- will give us the lead time we need to make space weather predictions truly useful.'

By accurately simulating the behavior of the corona, scientists hope to predict when it will produce flares and CMEs, the same way the National Weather Service uses computer simulations of Earth's atmosphere to predict when it will produce thunderstorms or hurricanes. The corona model is the starting point for a chain of models being developed by an NSF-supported science and technology center, The Center for Integrated Space Weather Modeling.

The computer model was based on spacecraft observations of magnetic activity on the sun's surface, which affects and shapes the corona above it. The SAIC team released simulated 'photographs' of the March 29 eclipse 13 days and again 5 days before the eclipse.

During a total solar eclipse, the moon blocks direct light coming from the sun, so the much fainter corona is visible, resembling a white, lacy veil surrounding the black disk of the moon. That is the only time the corona is visible from Earth without special instruments.

Because the corona is always changing, each eclipse looks different. The simulated photographs closely resembled actual photos of the eclipse, 'providing reassurance that the model may be able to predict space weather events,' said Mikic.

Previous simulations were based on simplified models, so the calculations could be completed in a reasonable time by computers available then. The new simulation is the first to base its calculations on the physics of how energy is transferred in the corona.

Because of the complex physics, the calculations required four days to complete on about 700 computer processors of the DataStar system at the NSF-supported San Diego Supercomputer Center.