Magellanic Clouds May Be Just Passing Through 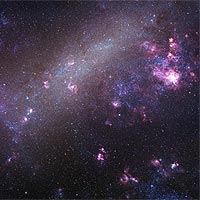 Astronomers Nitya Kallivayalil and Charles Alcock (Harvard-Smithsonian Center for Astrophysics) and Roeland van der Marel (Space Telescope Science Institute) have made the most accurate measurements to date of the three-dimensional velocities through space of the LMC and SMC. Their surprising results hold profound implications for both the Milky Way and its companions.

'We found that the velocities of the LMC and SMC are unexpectedly large - almost twice those previously thought,' says Kallivayalil.

These findings were presented today in a press conference at the 209th meeting of the American Astronomical Society.

The radial velocities (motion along the line of sight) for both Clouds are well known and relatively easy to measure.

Much more difficult to measure is the proper motion (motion across the sky), requiring extraordinary precision over the course of several years. Both proper motion and line-of-sight motion must be known to calculate the true 3-d velocity.

By making two sets of observations two years apart with NASA's Hubble Space Telescope, Kallivayalil and her colleagues calculated accurate proper motions for the LMC and SMC. By combining proper motions and radial velocities, they found that the LMC speeds through space at 378 km/sec (235 miles/sec) while the SMC has a speed of 302 km/sec (188 miles/sec).

There are two possible explanations for these high speeds:

2) The Magellanic Clouds are not gravitationally bound to the Milky Way. If previous calculations of the Milky Way's mass are accurate, then the Galaxy is not massive enough to hold onto its companions. In a few billion years, they will escape from the Milky Way.

'The Magellanic Clouds may not be true companions of the Milky Way,' explains Kallivayalil. 'Perhaps they are travelers just passing through the neighborhood.'

Future measurements of the Magellanic Stream--a long streamer of hydrogen gas trailing behind the Clouds--may clarify the previous paths of the Clouds and their relationships with each other and with the Milky Way.

'Regardless of what future work finds, our study shows that we need to reassess the orbital histories of the Clouds,' says Kallivayalil.

The Hubble Space Telescope is a project of international cooperation between NASA and the European Space Agency. The Space Telescope Science Institute, Baltimore, conducts Hubble science operations. The Institute is operated for NASA by the Association of Universities for Research in Astronomy, Inc., Washington.