Ultra-Dense Optical Storage — on One Photon 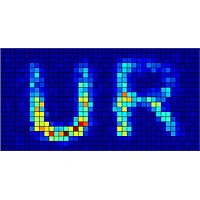 First image stored and retrieved from a single photon.

Researchers at the University of Rochester have made an optics breakthrough that allows them to encode an entire image's worth of data into a photon, slow the image down for storage, and then retrieve the image intact.

While the initial test image consists of only a few hundred pixels, a tremendous amount of information can be stored with the new technique.

The image, a 'UR' for the University of Rochester, was made using a single pulse of light and the team can fit as many as a hundred of these pulses at once into a tiny, four-inch cell. Squeezing that much information into so small a space and retrieving it intact opens the door to optical buffering—storing information as light.

'It sort of sounds impossible, but instead of storing just ones and zeros, we're storing an entire image,' says John Howell, assistant professor of physics and leader of the team that created the device, which is revealed in today's online issue of the journal Physical Review Letters. 'It's analogous to the difference between snapping a picture with a single pixel and doing it with a camera—this is like a 6-megapixel camera.'

Optical buffering is a particularly hot field right now because engineers are trying to speed up computer processing and network speeds using light, but their systems bog down when they have to convert light signals to electronic signals to store information, even for a short while.

Howell's group used a completely new approach that preserves all the properties of the pulse. The buffered pulse is essentially a perfect original; there is almost no distortion, no additional diffraction, and the phase and amplitude of the original signal are all preserved. Howell is even working to demonstrate that quantum entanglement remains unscathed.

To produce the UR image, Howell simply shone a beam of light through a stencil with the U and R etched out. Anyone who has made shadow puppets knows how this works, but Howell turned down the light so much that a single photon was all that passed through the stencil.

Quantum mechanics dictates some strange things at that scale, so that bit of light could be thought of as both a particle and a wave. As a wave, it passed through all parts of the stencil at once, carrying the 'shadow' of the UR with it. The pulse of light then entered a four-inch cell of cesium gas at a warm 100 degrees Celsius, where it was slowed and compressed, allowing many pulses to fit inside the small tube at the same time.

'The parallel amount of information John has sent all at once in an image is enormous in comparison to what anyone else has done before,' says Alan Willner, professor of electrical engineering at the University of Southern California and president of the IEEE Lasers and Optical Society. 'To do that and be able to maintain the integrity of the signal—it's a wonderful achievement.'

Howell has so far been able to delay light pulses 100 nanoseconds and compress them to 1 percent of their original length. He is now working toward delaying dozens of pulses for as long as several milliseconds, and as many as 10,000 pulses for up to a nanosecond.

'Now I want to see if we can delay something almost permanently, even at the single photon level,' says Howell. 'If we can do that, we're looking at storing incredible amounts of information in just a few photons.'