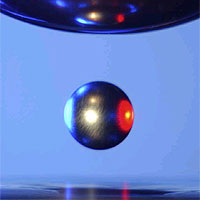 Inside the Electrostatic Levitator, it looks like magic when metal floats in mid-air with no visible means of support. Actually, the sample is suspended inside a chamber by static electricity generated by four electrodes and two electrode plates above and below the sample. A laser beam heats the sample until it melts. Scientists, like Dr. Ken Kelton, a researcher from Washington University in St. Louis, Mo., measure the sample's physical properties without interference of a container that would contaminate it. Since 1997, the Electrostatic Levitator at NASA's Marshall Space Flight Center in Huntsville, Ala., has been used to study the characteristics of new metals, ceramics and glass compounds - both in their hot molten states and as they are cooled to form solid materials. Materials created as a result of the tests include new optical materials, new metal alloys, special metallic glasses and spacecraft components. (NASA/MSFC/Emmett Given)

The research is featured on the cover of the July issue of Physics Today. It challenges theories about how crystals form by a process called nucleation, important in everything from materials to biological systems.

"Nucleation is everywhere," said Dr. Kenneth Kelton, the physics professor who leads a research team from Washington University in St. Louis. "It's the major way physical systems change from one phase to another. The better we understand it, the better we can tailor the properties of materials to meet specific needs," he said.

Using the Electrostatic Levitator at NASA's Marshall Space Flight Center in Huntsville, Ala., Kelton's team proved the hypothesis by focusing on the "nucleation barrier." German physicist Gabriel D. Fahrenheit, while working on his temperature scale, first observed the barrier in the 1700s. When he cooled water below freezing, it didn't immediately turn into ice but hung around as liquid in a supercooled state. That's because it took a while for all the atoms to do an atomic "shuffle" arranging in patterns to form ice crystals.

In 1950, Dr. David Turnbull and Dr. Robert Cech, researchers at the General Electric Company in Schenectady, N.Y., showed liquid metals also resist turning into solids. In 1952, physicist Dr. Charles Frank, of the University of Bristol in England, explained this "undercooling" behavior as a fundamental mismatch in the way atoms arrange themselves in the liquid and solid phases. Atoms in a liquid metal are put together into the form of an icosahedron, a pattern with 20 triangular faces that can't be arranged to form a regular crystal.

"The metal doesn't change to a solid instantly, because it costs energy for the atoms to move from the icosahedral formation in the liquid to a new pattern that results in a regular crystal structure in the solid metal," explained Kelton. "It's like being in a valley and having to climb over a mountain to get to the next valley. You expend energy to get over the barrier to a new place," he said.

Frank didn't know about quasicrystals, first discovered in 1984, and researchers didn't have tools like NASA's Electrostatic Levitator. Using electrostatic energy to levitate the sample was crucial, because stray contamination from containers cause crystals to form inside liquid metals, which would have ruined Kelton's measurements on pure samples.

To measure atom locations inside a drop of titanium-zirconium-nickel alloy, the levitator was moved to the Advanced Photon Source at Argonne National Laboratory in Chicago. There, an energetic beam of X-rays was used to map the average atom locations as the metal turned from liquid to solid. The experiment was repeated several times, and the data definitively verified Frank's hypothesis.

To prepare for an International Space Station experiment, the team is continuing levitator experiments. The new techniques being developed for these studies can be applied to solve advanced materials problems on Earth and for spacecraft applications.

"As NASA scientists develop advanced materials for rocket engines and spacecraft, our facility will be a technological tool they can use to characterize materials," said Dr. Jan Rogers, a Marshall Center scientist who assisted Kelton's research team.

A peer-reviewed article that discusses this work appeared in the May 16 issue of Physical Review Letters. The research was featured in the May 30 issue of Science.

News Story Origin and Copyright: NASA/MSFC
Click here for the original news release.
'On the mountains of truth you can never climb in vain: either you will reach a point higher up today, or you will be training your powers so that you will be able to climb higher tomorrow.'