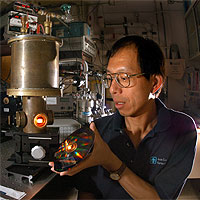 THE REAL HARRY POTTER? — A tungsten photonic lattice glows in a vacuum chamber as Sandia researcher Shawn Lin inspects an irridescent disk that contains approximately 1,000 tungsten photonic lattices. Most emissions from these filaments are in the near-infrared range, and may improve efficiencies of heat-driven engines like hybrid electric automobiles.

You can’t get something for nothing, physicists say, but sometimes a radical innovation effectively provides just that.

Researchers at Sandia National Laboratories have shown that filaments fabricated out of microscopic tungsten lattices and heated, emit remarkably more energy in a band of near-infrared wavelengths than solid tungsten filaments can.

This greater output offers the possibility of a superior energy source for powering hybrid electric cars, electric equipment on boats, and industrial waste-heat-driven electrical generators. The lattices’ energy emissions are at the right wavelengths to meet the specifications of photocells that currently change light into electricity to run engines.

Because near-infrared is the wavelength region closest to visible light, the day may not be distant when tungsten lattice emissions realized at visible wavelengths provide a foundation for more efficient lighting.

"This is an important and elegant work," says Cal Tech professor Amnon Yariv of the research achievement. Yariv is a member of the National Academy of Engineering and a leading figure in quantum optics research.

The work has been granted two patents with another pending. Papers describing the advance have been accepted by the journals Optics Letters and Applied Physics Letters.

Sub-micron-featured lattices — which resemble very tiny garden lattices carefully stacked one atop the other — can be fabricated cheaply with today’s computer-chip technologies.

The lattice itself can be visualized as a construction built of a child’s Lincoln Logs. The tungsten "logs" of this experiment have diameter 0.5 microns separated by distances of 1.5 microns.

The lattices are also known as photonic crystals because of the crystalline regularity of the spacing of its components. At first the crystals were of interest because they could bend specific frequencies of light without any loss of energy. This was because the crystal’s channels were constructed of exactly the right dimensions to form a ‘home’ for particular wavebands. The innovation of the current method is to use the channels not to bend light but to permit input energy to exit only in the desired frequency bands.

The shadow of Max Planck

The demonstration, led by Sandia physicist Shawn Lin, at first seemed to flout a well-known law formulated a century ago by Max Planck, one of the founders of modern physics. The equation, called Planck’s Law of Blackbody Cavity Radiation, predicts the maximum emissions expected at any wavelength from ideal solids.

The Sandia group exceeded these predictions by wide margins.

For the Sandia lattice heated in a vacuum to 1,250 degrees C — the typical operating temperature of a thermal photovoltaic generator — a conversion efficiency of 34 percent was calculated, three times the performance of an ideal blackbody radiator, predicted to be 11 percent.

Electrical power density was calculated to be approximately 14 watt/cm squared, rather than three watt/cm squared expected from an ideal blackbody radiator.

No deterioration of the tungsten lattice was observed, although long-term tests have yet to be run.

Lin says his group’s work does not break Planck’s law but modifies it by demonstrating the creation of a new class of emitters.

"To compare the amounts of emissions from a solid and a photonic lattice is like comparing a dog and a cat — or, a cat and a super cat," he says.

A heated photonic lattice subjects energies passing through its links and cavities to more complicated interactions than Planck dreamt of when he derived his formula that successfully predicted the output energies of simple heated solids, says Lin. Lattice output results from more complex photon-tungsten interaction than the system Planck formulated.

A lattice’s output can be considerably larger than a solid’s, but only in the frequency bands the lattice’s inner dimensions permit energy to emerge in.

Says Kazuaki Sakoda of Japan’s Nanomaterials Laboratory at the National Institue for Materials Science, "One of the most important issues in contemporary optics is the modification of the nature of the radiation field and its interaction with matter. [Lin’s] recent work clearly demonstrates that even Planck’s law — the starting point of the era of quantum mechanics [used to predict these interactions] — can be modified. To my knowledge, [Lin’s papers] are the first experimental report on this matter."

Theoretically, there are still unresolved questions as to how the process works without contradicting other physical laws.

Nevertheless, MIT physics professor John Joannopoulus in response to a question from Sandia’s Lab News had high praise for the work. "It is definitely not a — how did you put it — ‘a small step forward,’ it’s really a leap forward. It is a very clever experiment that’s completely believable. I think it’s an exciting experiment, very carefully done, and there’s some really interesting new science here." Joannopoulus is a pioneer in photonic lattices and wrote the first book on the field.

The scientist at rest

Standing in his equipment-cluttered laboratory, Shawn Lin grins happily among the vandalized wreckage of a number of ordinary light bulbs from K-Mart. His team pirates the bulbs’ screw-in bases and glass filament supports for use as cheap, pre-made connectors and supports for the iridescent slivers of photonic lattices — the size and shape of ordinary filaments — created by his team and substituted for common filaments of tungsten.

"Look!" Shawn says with obvious anticipation, and flips a switch connected to where the reconstituted filament sits in a vacuum chamber.

In its little chamber, like a kind of witches’ Sabbath for light bulbs, the bulb, though formerly dead, now glows again, but with a distinctly yellow light. The lattice filament, powered by only two watts, and with most of its output keyed to the infrared range at 1.5 to 2 microns, has enough of a tail into the visible spectrum for the lattice to glow. "We are that far along!" Lin says with satisfaction.

If these results at 1.5 microns can be extended to the visible spectrum, ramifications of this work may help form the next generation of lighting after the currently more mature LED technology.

The increased amount of energy available from lattices (also known as photonic crystals) at specific frequencies is important to engineers dealing with heat-driven engines.

A photonic lattice absorbing energies from a power plant generator’s excess heat could release it at higher frequencies readily absorbable by the photovoltaic cell that powers electricity-driven engines.

While such engines — best known in the form of electric-powered cars " exist, their efficiencies have been much lower than hoped because their receivers cannot absorb incoming energies across the wide spectrum of infrared radiation generated as unwanted heat but only from limited bands within the broad range. Here, the lattice could serve as a kind of funnel, forcing the heat radiation into predetermined frequency bands. When placed between the generator — be it solar, dynamo, or fire — and receiver, the metallic photonic lattice can be engineered to absorb energies, become thermally excited, and release them in only a few frequencies.

While some energy is lost in this process, it makes available the far greater energies that were previously unusable.

A year ago (Nature, May 2, 2002), Lin’s team showed that a tungsten lattice could gather absorbed energies at shorter wavelengths than ordinary tungsten could. Now, Lin with colleagues Jim Fleming, Jim Moreno (ret.), and Ihab El-Kady show actual emissions. The emission measurements were performed with the technical assistance of Jim Bur and Jonathan Rivera. Part of the earlier simulation of tungsten lattice’s absorption properties was done at Iowa State University/Ames National Laboratory, in work led by Professor Kai Ming Ho.