MIT 'optics on a chip' may revolutionize telecom, computing 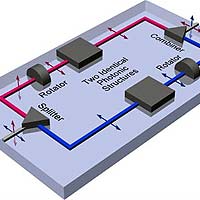 Illustration of MIT's solution to polarization sensitivity, which until now prohibited most real-world applications of 'optics on a chip.'

In work that could lead to completely new devices, systems and applications in computing and telecommunications, MIT researchers are bringing the long-sought goal of 'optics on a chip' one step closer to market.

In the January 2007 inaugural issue of the journal Nature Photonics, the team reports a novel way to integrate photonic circuitry on a silicon chip. Adding the power and speed of light waves to traditional electronics could achieve system performance inconceivable by electronic means alone.

The MIT invention will enable such integrated devices to be mass-manufactured for the first time. And, depending on the growth of the telecom industry, the new devices could be in demand within five years, said co-author Erich P. Ippen, the Elihu Thomson Professor of Electrical Engineering and Physics.

The new technology will also enable supercomputers on a chip with unique high-speed capabilities for signal processing, spectroscopy and remote testing, among other fields.

Microphotonics technology aims to 'mold' the flow of light. By using two different materials that refract light differently, such as silicon and its oxides, photons can be trapped within a miniscule hall of mirrors, giving them unique properties.

The stumbling block has been that microphotonics devices are sensitive to the polarization of light.

Light waves moving through optical fibers can be arbitrarily vertically or horizontally polarized, and microphotonic circuits don't work well with that kind of random input. This has meant that devices used in photonic subsystems and optical communication networks, for instance, couldn't connect to the outside world without often having to be assembled piecemeal and painstakingly by hand.

Like polarizing sunglasses, which use vertical polarizers to block the horizontally oriented light reflected from flat surfaces such as roads or water, the MIT method of integrating optics on a chip involves separating the two orientations of polarized light waves.
Splitting the difference

The MIT researchers' innovative solution involves splitting the light emanating from an optic fiber into two arms--one with horizontally polarized beams and one with vertical beams--in an integrated, on-chip fashion.

Setting these two at right angles to one another, the researchers rotated the polarization of one of the arms, also in an integrated way. The beams from the two arms, now oriented the same way, then pass through identical sets of polarization-sensitive photonic structures and out the other side of the chip, where the two split beams are rejoined.

'These results represent a breakthrough in permitting the processing and switching of arbitrarily polarized input light signals in tightly confined and densely integrated photonic circuitry,' said Ippen. The innovation means that optical components can be integrated onto a single silicon chip and mass-produced, cutting costs and boosting performance and complexity.

The advantage in integrating optics with silicon technology is that silicon fabrication technology 'is already highly developed and promises precise and reproducible processing of densely integrated circuits,' Kaertner said. 'The prospect of integrating the photonic circuitry directly on silicon electronic chips is ultimately also an important driver.'

In addition to offering a breakthrough in polarization, the MIT chip also contains first-of-their-kind components in materials meeting telecommunications specifications.

'Our results illustrate the importance of academic research in nanofabrication and academia's role in breaking new pathways for the industry to follow,' Smith said. 'Creating these devices was only possible due to the unique nanofabrication facilities at MIT, enabling fabrication with extraordinary precision.'

This work was supported by Pirelli Labs in Milan, Italy, and made use of MIT's Nanostructures Laboratory and MIT's Scanning Electron Beam Lithography Facility, both within the Research Laboratory of Electronics.