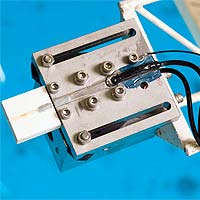 Using optical fibers, researchers at the Georgia Institute of Technology have created a sensor that detects the direction from which a sound is coming under water—an important improvement over current technology.

A new sensor that measures the motion created by sound waves under water could allow the U.S. Navy to develop compact arrays to detect the presence of enemy submarines. These new arrays would detect quiet underwater targets, while also providing unambiguous directional information.

Using optical fibers, researchers at the Georgia Institute of Technology have found a way to create a sensor that detects the direction from which a sound is coming under water. This directional component is an important improvement over the current technology, researchers said.

“Detecting quiet sounds under water can be very difficult,” said Francois Guillot, a research engineer in Georgia Tech’s George W. Woodruff School of Mechanical Engineering. “But our sensor detects small sounds over the noise of the ocean and also provides directional information.”

The sensor uses a mechanism inspired by how fish hear under water. Inside a fish’s ear, there are thousands of tiny hairs that move when a sound wave passes through the fish. These hairs then communicate with nerves allowing fish to hear under water. Because fish excel at detecting sound so they don’t get eaten, the Georgia Tech researchers chose the fish hearing system as their model, they said.

In the field of underwater acoustics, there is always a need to develop more sophisticated sensors, researchers said. The Navy currently tows long lines of hydrophones to listen to sound under water -- much like a microphone listens to sound in the air. A hydrophone measures the pressure change associated with the propagation of a sound wave. It converts acoustic energy into electrical energy and is used in passive underwater systems to listen only. One hydrophone identifies a sound nearby, and multiple hydrophones can help tell the direction from which it’s coming.. But directional ambiguity exists. A line array of hydrophones cannot tell if the sound is coming from the left or right.

Guillot and collaborators David Trivett, a principal research scientist, and Peter Rogers, a professor -- both in the School of Mechanical Engineering -- have developed a more compact, more sensitive sound detector that can provide unambiguous directional information. In addition, the sensor can be modified to measure the water deformation, known as shear, associated with a sound wave -- a quantity typically difficult to measure because it requires very sensitive instruments. This new sensor shows promise that it can be successfully modified to detect this acoustic shear, which will enhance the directional information, the researchers said.

The sensor is designed with two small plates attached by a hinge. One plate is held rigidly, and the other plate -- made of a composite material with the same density as water -- is free to move. The freely moving plate shifts in the sound field and follows the motion of water. A light signal sent through an optical fiber glued to both plates is modified by the motion of the freely moving plate. Analyzing the light signal with a photodetector provides information relative to the sound waves.

“If the Navy tows an array of hydrophones thousands of feet long, it makes it difficult to maneuver the ship,” Rogers said. “Since we can cut that length by a factor of more than five, it will cost less money to operate and be easier to handle.”

The current prototype sensor has been tested in the School of Mechanical Engineering’s large underwater acoustic tank facility to observe the behavior of the sensor under water. The facility includes a rectangular concrete water tank 25 feet deep, 25 feet wide and 34 feet long; it contains about 160,000 gallons of water. The researchers hope to field test the prototype system soon to see if it outperforms current technology.