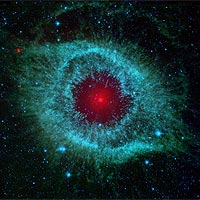 This infrared image from NASA's Spitzer Space Telescope shows the Helix nebula, a cosmic starlet often photographed by amateur astronomers for its vivid colors and eerie resemblance to a giant eye.

The nebula, located about 700 light-years away in the constellation Aquarius, belongs to a class of objects called planetary nebulae. Discovered in the 18th century, these colorful beauties were named for their resemblance to gas-giant planets like Jupiter.

Planetary nebulae are the remains of stars that once looked a lot like our sun. When sun-like stars die, they puff out their outer gaseous layers. These layers are heated by the hot core of the dead star, called a white dwarf, and shine with infrared and visible colors. Our own sun will blossom into a planetary nebula when it dies in about five billion years.

In Spitzer's infrared view of the Helix nebula, the eye looks more like that of a green monster's. Infrared light from the outer gaseous layers is represented in blues and greens. The white dwarf is visible as a tiny white dot in the center of the picture. The red color in the middle of the eye denotes the final layers of gas blown out when the star died.

The brighter red circle in the very center is the glow of a dusty disk circling the white dwarf (the disk itself is too small to be resolved). This dust, discovered by Spitzer's infrared heat-seeking vision, was most likely kicked up by comets that survived the death of their star. Before the star died, its comets and possibly planets would have orbited the star in an orderly fashion. But when the star blew off its outer layers, the icy bodies and outer planets would have been tossed about and into each other, resulting in an ongoing cosmic dust storm. Any inner planets in the system would have burned up or been swallowed as their dying star expanded.

So far, the Helix nebula is one of only a few dead-star systems in which evidence for comet survivors has been found.

A bunch of rowdy comets are colliding and kicking up dust around a dead star, according to new observations from NASA's Spitzer Space Telescope. The dead star lies at the center of the much-photographed Helix nebula, a shimmering cloud of gas with an eerie resemblance to a giant eye.

'We were surprised to see so much dust around this star,' said Dr. Kate Su of the University of Arizona, Tucson, lead author of a paper on the results appearing in the March 1 issue of Astrophysical Journal Letters. 'The dust must be coming from comets that survived the death of their sun.'

Spitzer's spectacular new view of the Helix nebula shows colors as seen in infrared and is online at http://www.nasa.gov/spitzer and www.spitzer.caltech.edu/Media. The dusty dead star appears as a dot in the middle of the nebula, like a red pupil in a green monster's eye.

The Helix nebula, located about 700 light-years away in the constellation Aquarius, was formed when a star much like our sun died and sloughed off its skin, or outer layers. Radiation from the dead star's hot core, called a white dwarf, heats the expelled material, causing it to fluoresce with vivid colors. This cosmic beauty, termed a planetary nebula, won't last long. In about 10,000 years, its shiny clouds will fade, leaving the white dwarf and its circling comets to cool down alone in empty space.

Astronomers have long studied the white dwarf at the center of the Helix nebula, but nobody had detected any dust close to it until now. Spitzer, an infrared space-based observatory, was able to pick up the glow of a dusty disk circling around the stellar corpse at a distance of about 35 to 150 astronomical units (an astronomical unit is the distance between our sun and Earth, which is 150 million kilometers or 93 million miles).

At first, Su and her team were shocked to see the dust. They said that when the star died, expelling its outer layers, dust in the system should have been blown away. The team then obtained more detailed data, which again pointed to the presence of a dusty disk.

Where is the dust coming from? According to the astronomers, it is most likely being freshly churned up by comets smashing into each other in the outer fringes of the white dwarf's system. A few million years ago, before the white dwarf formed, when it was still a lively star like our sun, its comets and possibly planets would have been in stable orbits, harmoniously traveling around the star. But when the star died, any inner planets would have burned up or been swallowed as the star expanded. Outer planets, asteroids and comets would have been jostled about and thrown into each other's paths.

Our own solar system will undergo a similar transformation in about five billion years. Like the Helix nebula, it will sparkle with colors. Our sun, which will have become a white dwarf, will be circled by a band of surviving outer planets and frenzied comets.

Spitzer has seen evidence before for such comet survivors around dead stars. In January of last year, astronomers reported using the observatory to find a dusty disk around a white dwarf, only the disk was much closer in, circling at a distance of only .005 to .03 astronomical units (http://www.spitzer.caltech.edu/Media/releases/ssc2006-04/index.shtml).

'Finding evidence for planetary activity around a white dwarf is a surprise,' said Dr. George Rieke of the University of Arizona, a co-author of the paper. 'Finding it twice with such different properties is a shock!'

But the Spitzer observations point to a different answer. According to Su's team member Dr. You-Hua Chu of the University of Illinois at Urbana-Champaign, material in the newfound disk surrounding the white dwarf might be falling onto the star and triggering the X-ray outbursts. 'The high-energy X-rays were an unsolved mystery, said Chu. 'Now, we might have found an answer in the infrared.'