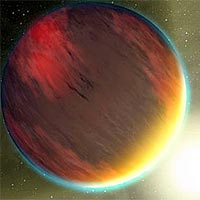 This artist's concept shows a cloudy Jupiter-like planet, similar to HD 209458b, that orbits very close to its fiery hot star.

So far, astronomers have discovered about 200 planets outside our solar system, known as 'extrasolar' planets. Very little is known about most of them, but for the first time, scientists have obtained new information about the atmospheres of two such planets by splitting apart the light emitted from them.

Sara Seager, MIT associate professor of earth, atmospheric and planetary sciences, is part of a research group based at Goddard Space Flight Center that studied a planet about 904 trillion miles from Earth, known as HD 209458b. The researchers used NASA's Spitzer Space Telescope to capture the most detailed information yet about an extrasolar planet.

Seager's team is one of three that are reporting spectral observations of extrasolar planets this week. Two groups studied HD 209458b, and one studied another planet in a different solar system. The work by Seager's team is reported in the Feb. 22 issue of Nature.

Astronomers often learn about distant objects, such as stars and galaxies, by studying the composition of light emitted by them, Seager said. But extrasolar planets are much dimmer than stars and thus far more difficult to study.

Light from extrasolar planets is 'very, very hard to measure because the stars are so bright and the planets are faint. This planet is right at the edge of what we can detect with this telescope,' said Seager, who arrived at MIT in January to start a program devoted to studying extrasolar planets.

The study appearing in Nature was led by L. Jeremy Richardson of the Goddard Space Flight Center near Baltimore, Md. The three studies mark the first time a telescope has captured enough light to detect traces of molecules in an extrasolar planet's atmosphere.

'This is an amazing surprise,' said Spitzer Project Scientist Michael Werner of NASA's Jet Propulsion Laboratory (JPL) in Pasadena, Calif. 'We had no idea when we designed Spitzer that it would make such a dramatic step in characterizing exoplanets.'

Studying light spectra only works with so-called 'transit planets'--planets whose orbits carry them in front of their sun when viewed from our solar system. HD 209458b, discovered in 1999 in the constellation Pegasus, was the first of 14 such planets that have been found.

Only a few of those planets, including HD 209458b, are bright enough for the spectral studies to yield useful data. A research group at Caltech is reporting spectral observations of another such planet, known as HD 189733b. Both planets are classified as 'hot Jupiters,' meaning they are large and gaseous, like Jupiter.

Temperatures on HD 209458b range from 1100 to 1600 degrees Kelvin, and the planet is so close to its sun that it takes only three and a half days to complete its orbit.

'That doesn't mean water vapor's not there, but it means the atmosphere is behaving differently than expected,' Seager said.

The Goddard team's other major finding was evidence of sandy particles known as silicates in the atmosphere of HD 209458b. NASA scientists hypothesize that clouds of those particles could be blocking emissions from water vapors.

Another team that studied HD 209458b, based at JPL obtained similar results.

The Goddard team recorded its data during two eclipses of HD 209458b, each of which lasted for about three hours. By subtracting the light that was emitted by the sun alone from the light of the planet and sun together, the researchers obtained a spectrum of light from the planet itself.

After the infrared light was captured, it was separated into its component wavelengths, the same way a prism diffracts light into a rainbow. Signatures at different wavelengths represent emissions from different chemical compounds present in the atmosphere.

The new results offer hope of finding and analyzing other planets, including smaller, rocky planets like Earth.

'It's very hard to find Earth-like planets because they're too small. But that's the ultimate goal,' said Seager.

Seager's team's research was funded by NASA, the Goddard Center for Astrobiology, the Spitzer Theory Program and the Carnegie Institute of Washington.