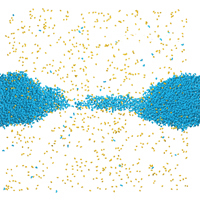 In 2000, Georgia Tech researchers showed that fluid dynamics theory could be modified to work on the nanoscale, albeit in a vacuum. Now, seven years later they've shown that it can be modified to work in the real world, too – that is, outside of a vacuum. The results appear in the February 9 issue of Physical Review Letters (PRL).

Understanding the motion of fluids is the basis for a tremendous amount of engineering and technology in contemporary life. Planes fly and ships sail because scientists understand the rules of how fluids like water and air behave under varying conditions. The mathematical principle that describe these rules wave put forth more than 100 years ago and are known as the Navier-Stokes equations. They are well-known and understood by any scientist or student in the field. But now that researchers are delving into the realm of the small, an important question arisen: namely, how do these rules work when fluids and flows are measured on the nanoscale? Do the same rules apply or, given that the behavior of materials in this size regime often has little to do with their macro-sized cousins, are there new rules to be discovered?

It’s well-known that small systems are influenced by randomness and noise more than large systems. Because of this, Georgia Tech physicist Uzi Landman reasoned that modifying the Navier-Stokes equations to include stochastic elements – that is give the probability that an event will occur – would allow them to accurately describe the behavior of liquids in the nanoscale regime.

Writing in the August 18, 2000, issue of Science, Landman and post doctoral fellow Michael Moseler used computer simulation experiments to show that the stochastic Navier-Stokes formulation does work for fluid nanojets and nanobridges in a vacuum. The theoretical predictions of this early work have been confirmed experimentally by a team of European scientists (see the December 13, 2006, issue of Physical Review Letters). Now, Landman and graduate student Wei Kang have discovered that by further modifying the Moseler-Landman stochastic Navier-Stokes equations, they can accurately describe this behavior in a realistic non-vacuous environment.

'There was a strong opinion that fluid dynamics theory would stop being valid for small systems,” said Landman, director of the Center for Computational Materials Science, Regents’ and Institute professor, and Callaway chair of physics at the Georgia Institute of Technology. “It was thought that all you could do was perform extensive, as well as expensive, molecular dynamic simulations or experiments, and that continuum fluid dynamics theory could not be applied to explain the behavior of such small systems.”

The benefit of the new formulations is that these equations can be solved with relative ease in minutes, in comparison to the days and weeks that it takes to simulate fluid nano structures, which can contain as many as several million molecules. Equally difficult, and sometimes even harder, are laboratory experiments on fluids in this regime of reduced dimensions.

In this study, Landman and Wei simulated a liquid propane bridge, which is a slender fluid structure connecting two larger bodies of liquid, much like a liquid channel connecting two rain puddles. The bridge was six nanometers in diameter and 24 nanometers long. The object was to study how the bridge collapses.

In the study performed in 2000, Landman simulated a bridge in a vacuum. The bridge broke in a symmetrical fashion, pinching in the middle, with two cones on each side. This time, the simulation focused on a model with a nitrogen gas environment surrounding the bridge at different gas pressures.

When the gas pressure was low (under 2 atmospheres of nitrogen), the breaking occurred in much the same way that it did in the previous vacuum computer experiment. But when the pressure was sufficiently high (above 3.5 atmospheres), 50 percent of the time the bridge broke in a different way. Under high pressure, the bridge tended to create a long thread and break asymmetrically on one side or the other of the thread instead of in the middle. Until now, such asymmetric long-thread collapse configuration has been discussed only for macroscopically large liquid bridges and jets.

Analyzing the data showed that the asymmetric breakup of the nanobridge in a gaseous environment relates to molecular evaporation and condensation processes and their dependence on the curvature of the shape profile of the nanobridge.

'If the bridge is in a vacuum, molecules evaporating from the bridge are sucked away and do not come back” said Landman. “But if there are gas molecules surrounding the bridge, some of the molecules that evaporate will collide with the gas, and due to these collisions the scattered molecules may change direction and come back to the nanobridge and condense on it.”

As they return they may fill in spaces where other atoms have evaporated. In other words, the evaporation-condensation processes serve to redistribute the liquid propane along the nanobridge, resulting in an asymmetrical shape of the breakage. The higher the pressure is surrounding the bridge, the higher the probability that the evaporating atoms will collide with the gas and condense on the nanobridge. Landman and Wei have shown that these microscopic processes can be included in the stochastic hydrodynamic Navier-Stokes equations, and that the newly modified equations reproduce faithfully the results of their atomistic molecular dynamics experiments.

'Knowing that the hydrodynamic theory, that is the basis of venerable technologies around us, can be extended to the nanoscale is fundamentally significant, and a big relief” said Landman. “Particularly so, now that we have been able to use it to describe the behavior of nanofluids in a non-vacuous environment – since we expect that this is where most future applications would occur.”

'I thank You God for this most amazing day; for the leaping greenly spirits of trees and a blue true dream of sky; and for everything which is natural which is infinite.'