From Diatoms to Gas Sensors 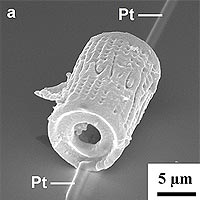 Image shows a sensor created from a microporous silicon structure converted from the shell (frustule) of a single diatom.

The three-dimensional shells of tiny ocean creatures could provide the foundation for novel electronic devices, including gas sensors able to detect pollution faster and more efficiently than conventional devices.

Using a chemical process that converts the shells’ original silica (silicon dioxide, SiO2) into the semiconductor material silicon, researchers have created a new class of gas sensors based on the unique and intricate three-dimensional (3-D) shells produced by microscopic creatures known as diatoms. The converted shells, which retain the 3-D shape and nanoscale detail of the originals, could also be useful as battery electrodes, chemical purifiers – and in other applications requiring complex shapes that nature can produce better than humans.

“When we conducted measurements for the detection of nitric oxide, a common pollutant, our single diatom-derived silicon sensor possessed a combination of speed, sensitivity, and low voltage operation that exceeded conventional sensors,” said Kenneth H. Sandhage, a professor in the School of Materials Science and Engineering at the Georgia Institute of Technology. “The unique diatom-derived shape, high surface area and nanoporous, nanocrystalline silicon material all contributed towards such attractive gas sensing characteristics.”

The unique devices, part of a broader long-term research program by Sandhage and his research team, were described in the March 8 issue of the journal Nature. The research was sponsored by the U.S. Air Force Office of Scientific Research and the U.S. Office of Naval Research.

Scientists estimate that roughly 100,000 species of diatoms exist in nature, and each forms a microshell with a unique and often complex 3-D shape that includes cylinders, wheels, fans, donuts, circles and stars. Sandhage and his research team have worked for several years to take advantage of those complex shapes by converting the original silica into materials that are more useful.

Ultimately, they would like to conduct such conversion reactions on genetically-modified diatoms that generate microshells with tailored shapes. However, to precisely alter and control the structures produced, further research is needed to learn how to manipulate the genome of the diatom. Since scientists already know how to culture diatoms in large volumes, harnessing the diatom genetic code could allow mass-production of complex and tailored microscopic structures.

“Diatoms are fabulous for making very precise shapes, and making the same shape over and over again by a reproduction process that, under the proper growth conditions, yields microshells at a geometrically-increasing rate,” Sandhage noted. “Diatoms can produce three-dimensional structures that are not easy to produce using conventional silicon-based processes. The potential here is for making enormous numbers of complicated 3-D shapes and tailoring the shapes genetically, followed by chemical modification as we have conducted to convert the shells into functional materials such as silicon.”

Silicon is normally produced from silica at temperatures well above the silicon melting point (1,414 degrees Celsius), so that solid silicon replicas cannot be directly produced from silica structures with such conventional processing. So the Georgia Tech researchers used a reaction based on magnesium gas that converted the silica of the shells into a composite containing silicon (Si) and magnesium oxide (MgO). The conversion took place at only 650 degrees Celsius, which allowed preservation of the complex channels and hollow cylindrical shape of the diatom.

The researchers then connected individual diatom-derived silicon structures to electrodes, applied current and used them to detect nitric oxide. The highly porous silicon shells, which are about 10 micrometers in length, could also be used to immobilize enzymes for purifying drugs in high-performance liquid chromatography (HPLC) and as improved electrodes in lithium-ion batteries.

“Silicon can form compounds that have a high lithium content,” Sandhage said. “Because diatom-derived silicon structures have a high surface area and are thin walled and highly porous, the rate at which you can get lithium ions into and out of such silicon structures can be high. For a given battery size, you could store more power, use it more rapidly or recharge the battery faster by using such structures as electrodes.”

In testing, the researchers showed that the silicon they produced was photoluminescent – meaning it glows when illuminated by certain wavelengths of light. That shows the fabrication process produced a nanoporous, nanocrystalline structure – and may have interesting photonic applications in addition to the electronic ones.

Though Sandhage and his collaborators have demonstrated the potential of their technique, significant challenges must be overcome before they can produce useful sensors, battery electrodes and other structures. The sensors will have to be packaged into useful devices, for example, connected into arrays of devices able to detect different gases and scaled up for volume manufacture.

The Aulacoseira diatoms used in the research reported by Nature were millions of years old, obtained from samples mined and distributed as diatomaceous earth. To provide samples with other geometries, Sandhage’s group has set up a cell culturing lab, with the assistance of Georgia Tech colleagues Nils Kröger and Nicole Poulson, to grow the brownish-colored diatoms.

Sandhage, who is a ceramist by training, would now like to work directly with electronics engineers and others who have specific interests in silicon-based devices.

“We can target diatoms of a certain shape, generate the right chemistry, and then work with applications engineers to get these unique structures into practice,” he said. “We are now at the point where we have a good idea of the chemical palette that is accessible with the conversion approaches we have taken. The next step is really to start making packaged devices.” 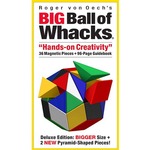