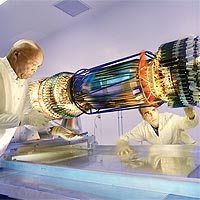 Silicon Vertex Tracker. The SVT is the heart of the BABAR experiment at SLAC-in the photo, physicists are putting the finishing touches on improvements to the detector.

Whilst science fiction toys effortlessly with anti-matter, in reality it can be very hard to produce, so researchers around the world are celebrating a new break through in this area. For the first time, scientists using the BaBar experiment at the Stanford Linear Accelerator Center (SLAC) have observed the transition of one type of particle, the neutral D-meson, into its antimatter particle - a process known as 'mixing'. The new observation will be used as a test of the Standard Model, the current theory that best describes the entire universe's luminous matter and its associated forces.

UK BaBar spokesman, Fergus Wilson of the Rutherford Appleton Lab said 'D-meson mixing was first predicted over three decades ago but it is such an elusive phenomenon that it has taken until today to see it. The observation of D-meson mixing is yet another outstanding achievement for the BaBar experiment. The BaBar collaboration continues to make ground-breaking measurements that challenge our understanding of how elementary particles behave.'

'Achieving the large number of collisions needed to observe D-meson mixing is a testament to the tremendous capabilities of the laboratory's accelerator team,' said SLAC Director Jonathan Dorfan. 'The discovery of this long-sought-after process is yet another step along the way to a better understanding of the Standard Model and the physics beyond.'

The PEP-II accelerator complex at SLAC, also known as the B Factory, allows the BaBar collaboration to study not only B-mesons but also several other types of particles including the D-meson. Mesons, of which there are about 140 types, are made up of fundamental particles called quarks, which can be produced when particles collide at high energy. A flurry of particles in a variety of combinations is produced when electrons and positrons smash together at high energy in the PEP-II collider facility. One of the most elusive results of this flurry is the transformation of one particle into its anti-particle in a process physicists call 'mixing'. Neutral K-mesons, observed more than 50 years ago, were the first elementary particles to demonstrate this phenomenon. About 20 years ago, scientists observed mixing with the B-meson. Now, for the first time, the BaBar experimenters have seen the D-meson transform into its anti-particle, and vice versa.

'This is a very exciting moment for us, having found the missing puzzle piece for particle-antiparticle mixing,' said BaBar Spokesman Hassan Jawahery, a physics professor at the University of Maryland.

D-meson mixing is remarkably rare. Of the BaBar experiment's several billion recorded collisions, this study focuses on about a million events containing a D-meson decay that are candidates for this effect. The experimenters found about 500 events in which a D-meson had changed into an anti-D-meson before decaying.

By observing the rare process of D-meson mixing, BaBar collaborators can test the intricacies of the Standard Model. To switch from matter to antimatter, the D-meson must interact with 'virtual particles,' which through quantum fluctuations pop into existence for a brief moment before disappearing again. Their momentary existence is enough to spark the D-meson's transformation into an anti-D-meson. Although the BaBar detector cannot directly see these virtual particles, researchers can identify their effect by measuring the frequency of the D-meson to anti-D-meson transformation. Knowing that quantity will help determine whether the Standard Model is sufficient or whether it must be expanded to incorporate new physics processes.

'It's too soon to know if the Standard Model is capable of fully accounting for this effect, or if new physics is required to explain the observation,' said Jawahery. 'But in the coming weeks and months we are likely to see an abundance of new theoretical work to interpret what we've observed.'

Some 600 scientists and engineers from 77 institutions in Canada, France, Germany, Italy, the Netherlands, Norway, Russia, Spain, the United Kingdom and the United States work on BaBar. SLAC is funded by the US Department of Energy's Office of Science. UK involvement is funded by PPARC.