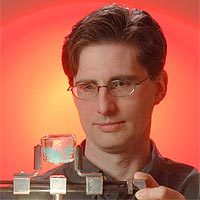 Sandia’s huge Z machine, which generates temperatures hotter than the sun, has turned water to ice in nanoseconds.

However, don’t expect anything commercial just yet: the ice is hotter than the boiling point of water.

“The three phases of water as we know them — cold ice, room temperature liquid, and hot vapor — are actually only a small part of water’s repertory of states,” says Sandia researcher Daniel Dolan. “Compressing water customarily heats it. But under extreme compression, it is easier for dense water to enter its solid phase [ice] than maintain the more energetic liquid phase [water].”

In the Z experiment, the volume of water shrank abruptly and discontinuously, consistent with the formation of almost every known form of ice except the ordinary kind, which expands. (One might wonder why this ice shrank instead of expanding, given the common experience of frozen water expanding to wreck garden hoses left out over winter. The answer is that only “ordinary” ice expands when water freezes. There are at least 11 other known forms of ice occurring at a variety of temperatures and pressures.)

“This work,” says Dolan, “is a basic science study that helps us understand materials at extreme conditions.”

But it has potential practical value. The work, which appears online March 11 in Nature Physics, was undertaken partly because phase diagrams that predict water’s state at different temperatures and pressures are not always correct — a fact worrisome to experimentalists working at extreme conditions, as well as those having to work at distances where direct measurement is impractical. For example, work reported some months ago at Z demonstrated that astronomers’ ideas about the state of water on the planet Neptune were probably incorrect.

Closer at hand, water in a glass could be cooled below freezing and remain water, in what is called a supercooled state.

Accurate knowledge of water’s behavior is potentially important for Z because the 20-million-ampere electrical pulses the accelerator sends through water compress that liquid. Ordinarily, the water acts as an insulator and as a switch. But because the machine is being refurbished with more modern and thus more powerful equipment, questions about water’s behavior at extreme conditions are of increasing interest to help avoid equipment failure for the machine or its more powerful successors, should those be built.

One unforeseen result of Dolan’s test was that the water froze so rapidly. The freezing process as it is customarily observed requires many seconds at the very least.

The answer, says Dolan, seems to be that very fast compression causes very fast freezing. At Z and also at Sandia’s nearby STAR (Shock Thermodynamic Applied Research) gas gun facility, thin water samples were compressed to pressures of 50,000-120,000 atmospheres in less than 100 nanoseconds. Under such pressures, water appears to transform to ice VII, a phase of water first discovered by Nobel laureate Percy Bridgman in the 1930s. The compressed water appeared to solidify into ice within a few nanoseconds.

Ice VII has nothing to do with ice-nine, an entirely fictional creation of author Kurt Vonnegut in his 1963 novel Cat’s Cradle. There, a few molecules of the invented substance acts as a precipitating seed to cause an extended chemical reaction that freezes almost all of Earth’s water. Ice VII, on the other hand, only stays frozen as long as it is under enormous pressure. The pressure relenting, the ice changes back to ordinary water.

Nucleating agents, of course, are often used to hasten sluggish chemical processes, such as when clouds are “seeded” with silver iodide to induce rain. Dolan already had demonstrated, as a graduate physics student at Washington State University, that water can freeze on nanosecond time scales in the presence of a nucleating agent.

However, the behavior of pure water under high pressure remained a mystery.

Sandia instruments observed the unnucleated water becoming rapidly opaque — a sign of ice formation in which water and ice coexist — as pressure increased. At the 70,000 atmosphere mark and thereafter, the water became clear, a sign that the container now held entirely ice.

For these tests, Z created the proper conditions by magnetic compression. Twenty million amperes of electricity passed through a small aluminum chamber, creating a magnetic field that isentropically compressed aluminum plates roughly 5.5 by 2 inches in cross section. This created a shockless but rapidly increasing compression across a 25-micron-deep packet of water.

The multipurpose Z machine, whose main use is to produce data to improve the safety and reliability of the US nuclear deterrent, has compressed spherical capsules of hydrogen isotopes to release neutrons — the prerequisite for controlled nuclear fusion and essentially unlimited energy for humanity.

This work is sponsored by the NNSA. Other authors on the paper are Chris Deeney (now at NNSA), and Sandians Mark Knudson and Clint Hall.