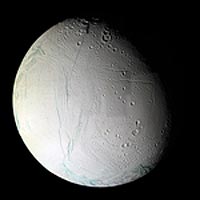 New data from NASA's Cassini spacecraft, reported in the online version of Science today (22nd March), shows how the small moon, Enceladus, is weighing down Saturn's magnetic field so much that the field is rotating slower than the planet. This phenomenon makes it nearly impossible to measure the length of the Saturn day using techniques that work at the other giant planets.

'No one could have predicted that the little moon Enceladus would have such an influence on the radio technique that has been used for years to determine the length of the Saturn day,' said Dr Don Gurnett of the University of Iowa, Iowa City. Gurnett is the principal investigator on the radio and plasma wave science experiment onboard NASA's Cassini spacecraft. The radio technique measures the rotation of the planet by taking its radio pulse rate - the rhythm of natural radio signals from the planet.

A new study of Cassini data determined that Saturn's magnetic field lines, invisible lines originating from the interior of a magnetized planet, are being forced to slip relative to the rotation of the planet by the weight of electrically charged particles originating from geysers spewing water vapor and ice from Enceladus. These results are based on joint observations by two Cassini instruments-the radio and plasma wave instrument and the magnetometer.

'The direct link between radio, magnetic field and deep planetary rotation has been taken for granted up to now. Saturn is showing we need to think further,' said Professor Michele Dougherty, principal investigator on Cassini's magnetometer instrument from Imperial College London.

The neutral gas particles ejected from the geysers on Enceladus form a doughnut-like torus around Saturn. As these particles become electrically charged, they are captured by Saturn's magnetic field, forming a disk of ionized gas, or plasma, which surrounds the planet near the equator. The particles weigh down the magnetic field so much that the plasma disk slows down slightly. This slippage causes the radio period, controlled by the plasma disk rotation, to be longer than the planet's actual rotation period.

Scientists conclude the period Cassini has been measuring from radio emission is not the length of the Saturn day, but rather the rotation of the plasma disk. At present, because of Saturn's cloud motion, no technique is known that can accurately measure the planet's actual internal rotation.

Finding out the length of Saturn's day has been a challenge because the gaseous planet has no surface or fixed point to clock its rotation rate. Initially, the approach was to use periodic regular radio signals, as has been done for Jupiter, Uranus and Neptune. However, Saturn's radio period has turned out to be troubling in two ways. It seems to be a pulsed signal rather than a rotating, lighthouse-like beam. Secondly, the period seems to be slowly changing over months to years. The day measured by Cassini is some six minutes longer than the day recorded by NASA's Voyager spacecraft in the early 1980s, a change of nearly 1 percent.

'We have linked the pulsing radio signal to a rotating magnetic signal. Once each rotation of Saturn's magnetic field, an asymmetry in the field triggers a burst of radio waves,' said Professor David Southwood, co-author, Imperial College London, and director of science at the European Space Agency. 'We have then linked both signals to material that has come from Enceladus.'

Based on the new observations, scientists now think there are two possible reasons for the change in radio period. The first theory is that the geysers on Enceladus could be more active now than in Voyagers' time. The second is that there may be seasonal variations as Saturn orbits the sun once every 29 years.

'One would predict that when the geysers are very active, the particles load down the magnetic field and increase the slippage of the plasma disk, thereby increasing the radio emission period even more. If the geysers are less active, there would be less of a load on the magnetic field, and therefore less slippage of the plasma disk, and a shorter period,' said Gurnett.

Dr Hugo Alleyne from the University of Sheffield is a UK co-investigator on the radio and plasma wave instrument. He comments, 'This is a very significant result which would not have been possible without the suite of instruments on the Cassini spacecraft making simultaneous measurements of fields, waves and plasma. It is likely to have implications in the interpretation of other astronomical and planetary measurements.'