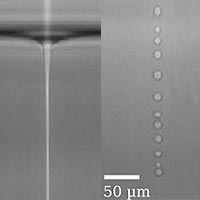 A jet of liquid and stream of droplets formed by a laser shining from above. The white bar at bottom left is approximately the width of a human hair. In the March 30 issue of Physical Review Letters, scientists at the University of Chicago and the University of Bordeaux I present evidence that the jet was produced entirely by radiation pressure from the laser beam. The research was funded by the U.S. National Science Foundation and the Centre National de la Recherche Scientifique and Conseil Régional d’Aquitaine.

It is possible to manipulate small quantities of liquid using only the force of light, report University of Chicago and French scientists in the March 30 issue of Physical Review Letters.

“In previous work, people figured out that you can move individual particles with lasers,” said Robert Schroll, graduate student in physics at the University of Chicago and lead author of the PRL article. Now it appears that lasers can also be used to generate bulk flow in fluids. “As far as we know, we’re the first to show this particular effect,” Schroll said.

Schroll and Wendy Zhang, Assistant Professor in Physics at the University of Chicago, carried out the project with RŽgis Wunenburger, Alexis Casner and Jean-Pierre Delville of the University of Bordeaux I. The technique might offer a new way to control the flow of fluids through extremely narrow channels for biomedical and biotechnological applications.

In their experiment, the Bordeaux scientists shined a laser beam through a soapy liquid. The laser produced a long jet of liquid that broke up into droplets after traversing a surprisingly long distance.

“I thought this was just so weird because I know when liquid is supposed to break up, and this one isn’t doing it,” Zhang said.

Physicists know that lasers can set liquid in motion through heating effects, but heat was not a factor in this case. The liquid used in the Bordeaux experiment is a type that absorbs very little light. Heating the liquid would require more light absorption. In this case, the Chicago team’s theoretical calculations matched the Bordeaux team’s experimental results: the mild force of the light itself drives the liquid motion.

“Light is actually pushing onto us slightly. This effect is called radiation pressure,” Zhang said.

This gentle pressure generated by photons—particles of light—ordinarily goes unnoticed. But the liquid used in the Bordeaux experiment has such an incredibly weak surface that even light can deform it.

The experimental liquid was a mixture of water and oil. “It’s basically soap,” Zhang said. But Delville and his associates have precisely mixed the liquid to display different characteristics under certain conditions.

“A lot of shampoos and conditioners are designed to do that,” Zhang said. Shampoo poured out of a bottle exists in one state. Add water and it turns into another state. Delville’s liquid behaves similarly, except that he has rigged it to change its properties at 35 degrees Celsius (95 degrees Fahrenheit). Below 35 degrees Celsius, the liquid takes one form. Above that temperature, it separates into two distinct forms of differing density.

Physicists refer to this as a “phase change.” Many phase changes, like changing boiling water into steam, are familiar in everyday life. The phase change that the Bordeaux group engineered in its laboratory is more exotic. As the soapy liquid approached the critical temperature, it took on a pearly appearance. This color change signaled the intense reflection, or scattering, of photons.

“The photon will scatter off some part of the fluid, but moves away with the same energy that it came in with,” Schroll explained. “This scattering effect is what’s responsible for the flow that we see. Because the photon doesn’t lose energy it doesn’t transfer any energy into the fluid itself, so it doesn’t cause any heating.”

Delville first observed this effect after completing a previous experiment involving the behavior of the same fluid under a less intense laser beam. He turned up the laser power to see what it could do, much the same way a motorist might test the performance of a powerful car on a deserted road.

“He turned up the power and then saw this amazing thing,” Zhang said. “Because he has a lot of experience with optics, he realized that what he saw was strange.”

Further research may determine whether light-driven flow could provide a new twist to microfluidics, the science of controlling fluid flow through channels thinner than a human hair. In microfluidics, researchers bring together tiny streams of droplets or liquids to produce chemical reactions. Laser light can do that, too, Zhang said, “but it does all that completely differently from conventional microfluidics.”

“Here I’ve created a channel, but I didn’t have to make anything. I just shined a light,” Zhang said.