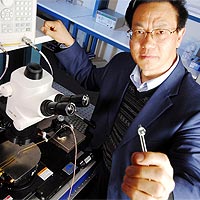 Based on arrays of vertically-aligned zinc oxide nanowires that move inside a novel “zigzag” plate electrode, the nanogenerators could provide a new way to power nanoscale devices without batteries or other external power sources.

'This is a major step toward a portable, adaptable and cost-effective technology for powering nanoscale devices,' said Zhong Lin Wang, Regents’ Professor in the School of Materials Science and Engineering at the Georgia Institute of Technology. 'There has been a lot of interest in making nanodevices, but we have tended not to think about how to power them. Our nanogenerator allows us to harvest or recycle energy from many sources to power these devices.'

Details of the nanogenerator were reported in the April 6 issue of the journal Science. The research was sponsored by the Defense Advanced Research Projects Agency (DARPA), the National Science Foundation (NSF), and the Emory-Georgia Tech Center of Cancer Nanotechnology Excellence.

The nanogenerators take advantage of the unique coupled piezoelectric and semiconducting properties of zinc oxide nanostructures, which produce small electrical charges when they are flexed.

Fabrication begins with growing an array of vertically-aligned nanowires approximately a half-micron apart on gallium arsenide, sapphire or a flexible polymer substrate. A layer of zinc oxide is grown on top of substrate to collect the current. The researchers also fabricate silicon “zigzag” electrodes, which contain thousands of nanometer-scale tips made conductive by a platinum coating.

The electrode is then lowered on top of the nanowire array, leaving just enough space so that a significant number of the nanowires are free to flex within the gaps created by the tips. Moved by mechanical energy such as waves or vibration, the nanowires periodically contact the tips, transferring their electrical charges. By capturing the tiny amounts of current produced by hundreds of nanowires kept in motion, the generators produce a direct current output in the nano-Ampere range.

Wang and his group members Xudong Wang, Jinhui Song and Jin Liu expect that with optimization, their nanogenerator could produce as much as 4 watts per cubic centimeter – based on a calculation for a single nanowire. That would be enough to power a broad range of nanometer-scale defense, environmental and biomedical applications, including biosensors implanted in the body, environmental monitors – and even nanoscale robots.

Nearly a year ago, in the April 14, 2006 issue of the journal Science, Wang’s research team announced the concept behind the nanogenerators. At that time, the nanogenerator could harvest power from just one nanowire at a time by dragging the tip of an atomic force microscope (AFM) over it. Made of platinum-coated silicon, the tip served as a Schottky barrier, helping accumulate and preserve the electrical charge as the nanowire flexed – and ensuring that the current flowed in one direction.

With its multiple conducting tips similar to those of an AFM, the new zigzag electrode serves as a Schottky barrier to hundreds or thousands of wires simultaneously, harvesting energy from the nanowire arrays.

“Producing the top electrode as a single assembly sets the stage for scaling up this technology,” Wang said. “We can now see the steps involved in moving forward to a device that can power real nanometer-scale applications.”

Before that happens, additional development will be needed to optimize current production. For instance, though nanowires in the arrays can be grown to approximately the same length – about one micron – there is some variation. Wires that are too short cannot touch the electrode to produce current, while wires that are too long cannot flex to produce electrical charge.

“We need to be able to better control the growth, density and uniformity of the wires,” Wang said. “We believe we can make as many as millions or even billions of nanowires produce current simultaneously. That will allow us to optimize operation of the nanogenerator.”

In their lab, the researchers aimed an ultrasound source at their nanogenerator to measure current output over slightly more than an hour. Though there is some fluctuation in output, the current flow was continuous as long as the ultrasonic generator was operating, Wang said.

To rule out other sources of the current measured, the researchers substituted carbon nanotubes – which are not piezoelectric – for the zinc oxide nanowires, and used a top electrode that was flat. In both cases, the resulting devices did not produce current.

Providing power for nanometer-scale devices has long been a challenge. Batteries and other traditional sources are too large, and tend to negate the size advantages of nanodevices. And since batteries contain toxic materials such as lithium and cadmium, they cannot be implanted into the body as part of biomedical applications.

Because zinc oxide is non-toxic and compatible with the body, the new nanogenerators could be integrated into implantable biomedical devices to wirelessly measure blood flow and blood pressure within the body. And they could also find more ordinary applications.

“If you had a device like this in your shoes when you walked, you would be able to generate your own small current to power small electronics,” Wang noted. “Anything that makes the nanowires move within the generator can be used for generating power. Very little force is required to move them.”

News Story Origin and Copyright: GaTech
Click here for the original news release.
'On the mountains of truth you can never climb in vain: either you will reach a point higher up today, or you will be training your powers so that you will be able to climb higher tomorrow.'